The OS Award for "excellence in geography teaching in secondary education" is awarded annually by the RGS-IBG. This years's winners were announced earlier in the week - there are usually two people who receive the award each year.

This year, we have: 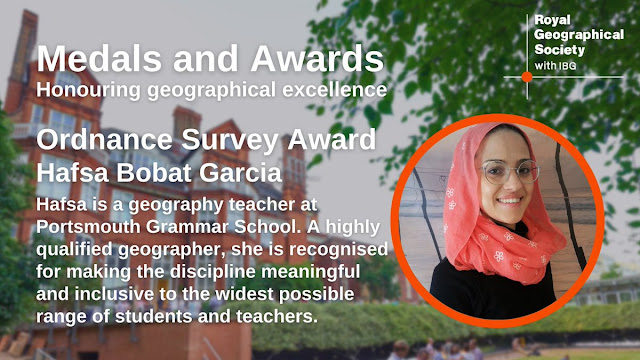 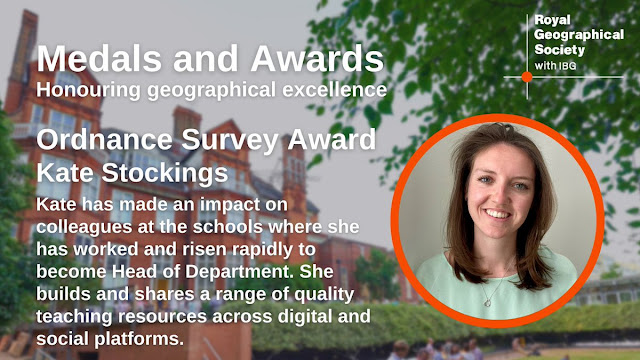 It occured to me that many winners have connections with the GA as well as the RGS-IBG, just as many GA Presidents have had over the years. This is a cross-post with my GA Presidents blog project, which has now reached 2009, and explored some of those long-running connections between the two organisations.

Here are the previous winners of the OS Award - you will spot some very well known names there and people who have above all shared their practice widely and worked particularly hard within their own subject communities. I've met and worked with a fair proportion of these colleagues. I've emboldened those who have a particular involvement with the GA, whether that is serving on a committee, offering CPD, writing journal articles or some other connection that can be articulated.

ORDNANCE SURVEY AWARD (First awarded in 1998)
1998
Linda Thompson - served on GA SPC when I first joined it around 2004, before leaving for an advisory role in the National Strategies
1999
Paul Machon - co-wrote a book on 'Citizenship through Secondary Education' with David Lambert.
Mike Morrish - served as GA President in 1995 and co-founded the GA's Worldwise Quiz with Rex Walford in 1984
2000
Bob Jones - has a long association with the GA Staffordshire branch and served as a GA officer, kindly put me up when I spoke at the branch many years ago, and attended the centenary celebration in 1993.
Adrian Wyles - Headteacher and former Head of Geography at Hurspierpoint College - one of the places I visited while working for the GA
2001
Dr Ian Selmes - reviews editor of TG, and also supporting the GeoLincs branch in Lincolnshire - still active in these regards and supportive of GA activity
Douglas Greig - teacher and headteacher - filmed for the National Strategies video series, and worked on literacy in geography, contributing chapters to textbooks on cross-curricular literacy
2002
Andrew Leeder - written widely for WJEC, with a whole host of textbooks authored and also a '100 ideas' book as well as other contributions
David Rayner - one of the National CfBT Subject Leads, creator of early Geography website and later ITE tutor at UCL IoE - heavily involved in SLN as well, and a regular at SAGT and the GA conferences for a while
2003
Noel Jenkins - one of the most creative geographers I know, although he now works as one of our NHS heroes - lots of writing, websites including Juicy Geography and Digital Geography and involved in SLN and other projects - I still use his ideas even today and meet up annually when possible - the Wellington Planning activity is an absolute top five classic and is ten years old tomorrow
Steve Martin - no, I'm not going to make the obvious comment...
2004
Pauline Marsden - contributed to GA journals over the years
Richard Cope - a regular at GA Conference, and creator of many interactive tools for fieldwork for GeoPacks
2005
Kenneth Dunn - active in supporting projects in Africa, former Headteacher in Sheffield
Anne-Marie Emmett - one of the teachers who joined the YPG project; has also led CPD sessions for the GA in a number of locations, including an event we both presented at at Holt Hall some years ago now, and also written for the GA...
2006
Paula Cooper - former HoD at King Edward VI Five Ways, working with Bob Lang, hosted ESRI GIS courses, and also invited me to an Iain Stewart lecture some years ago, involved in Making Geography Happen project, and also wrote some support materials for the Manifesto - moved to Australia some years ago, and I think is involved with GTANSW, also wrote Toolkit materials
Val Vannet - former Depute Head at the High School of Dundee, heavily involved with SAGT and invited me to conferences in 2004 following connections made through SLN - gave fraternal greetings at a number of GA conferences
2007
Louise Ellis - Author of KS3 Toolkit book 'A Thorny Issue'
Alan Parkinson - more on me to come later
2008
Stuart Cousins - teacher in Wakefield, wrote about IWBs, and involved in a project exploring departmental websites and other GA activity
Ian Dixson - long association with GA Black Country branch
2009
Graham Goldup - linked with Cardinal Newman School in Brighton, and also led CPD for local networks, now heavily involved with the PTI Geography programme of CPD
Rebecca Kitchen - at the time was working in Aylesbury, served on SPC and is now working for the GA in a role which has evolved through the time she has been there
2010
Adrian Taylor

Helen Young - Helen's GeographyGeek website is known to many, having been around since 2008 and Helen also worked with the AEGIS GIS software and led CPD for many
2011
Bob Lang - wrote book on GIS for the GA, which I edited, and currently serves on the GA ICTSIG and also a regular at conference, also involved with SLN back in the day, and hosted GIS events at his school in Birmingham
Ruth Ware - Head of Geography in Bexley
2012
Paul Cornish - wrote book on Multimedia in Geography, which I edited, and I visited his school which was in South London at the time - still in school management
Lydia Williams - teaching at a school in Kensington, has written resources for the RGS-IBG including a From the Field piece on Arid Environments
2013
Maria Larkin - as with Graham Goldup, associated with Cardinal Newman School, local networks and the PTI
David Rogers - served on GA SPC for a while, high profile blogger, author of a number of books, regular CPD presenter and organiser of the GA Conference Teachmeet
2014
Dr Simon Oakes - known to many through his examining for the IB and Eduqas, prolific textbook writer and also resource author for the RGS-IBG, particularly their Geography in the News resources, and also a speaker at subject update events; served on GA Post-16 committee
Elizabeth Phipson
2015
Andrew Emms - Primary school Headteacher
Raphael Heath - works in Bath and was very active in the GIS community for some time and led some World Record Breaking attempts at involving students.
2016
Joanna Debens - worked at Priory School with David Rogers, but was promoted to a school in Kent; co-wrote OCR A and B GCSE Geography textbooks with me and others, now in their 2nd editions
Kate Otto

2017
Claire Power - Head of Geography in Sussex
Paul Turner - formerly Head of Geography at Bedales School, and has shared a number of schemes of work including one on the Climate Emergency and one on Hans Rosling's 'Factfulness' - now works with Sustrans and other partners
2018
Laura-Jayne Ward - serves on the GA's Post-16 committee
Aidan Hesslewood - set up the GeoLincs network, and led his department to a Centre of Excellence Award before joining the team that moderates the GA's Secondary Geography Quality Mark - written for GA journals.
2019
Jennifer Monk - active in Twitter / GeogChat and other similar communities and sat on the Generous Geographers panel that Susan Pike organised for the GA Conference 2021
Rob Chambers - I have known Rob for many years. He shares his work widely with GeoBytes blog and website, and also supports the GA Cambridge branch.
2020
Emma Metcalfe - teacher on the Isle of Man, whose departments holds a Centre of Excellence award
Charity Mhlanga - teacher in London, created resources for the RGS, and was also interviewed by John Lyon for the GA's GeogPod
2021
Hafsa Bobat Garcia - active in the GA on committees, and also working with the Conference Planning Board, as well as contributing to the wider work of the association's current thinking on decolonising geography.
Kate Stockings - has presented at the GA Conference for several years; active in sharing on a range of networks, and also serves on the International Special Interest Group. Kate is also working as a London National Park City Ranger.
Further thoughts and additional details welcome...
Awards GA GA Branches Geographical Association Michael Morrish Ordnance Survey Rex Walford RGS-IBG RGS-IBG Awards