on July 06, 2019
Thanks to Shailey Minocha for the heads up to Mark Brandon's inaugural Professorial lecture.
I worked along with Mark on some materials for Digital Explorer some years back, and he has also kindly provided images for textbook chapters I've written on the Polar regions.
He has also worked on several high profile BBC series on the Polar regions, and is a holder of the Polar Medal, and some excellent ties. 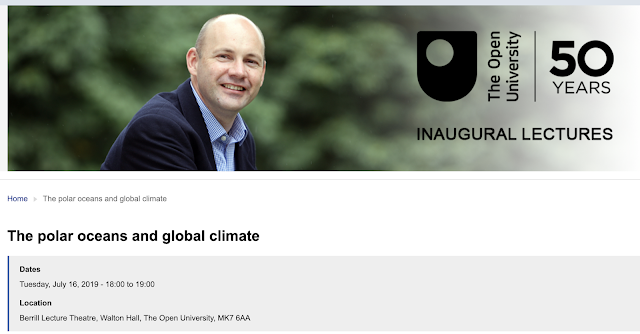 Here's the trailer for the lecture.
And the abstract:

Over the last 50 years both the physical environment and our perception of the polar regions has changed. Then, we were still exploring their basic geography, but now we understand the future impacts of our carbon emissions on the great polar ice sheets. Polar bears and penguins were only seen in zoos and now amazing television documentaries show hundreds of millions of people these animals in their natural habitat. With the revolution in global knowledge from satellites and broadcast, at one level the polar regions are now well known. But they remain remote.

We now understand that the ice-covered polar oceans are critical for the climate of our planet. In this lecture Professor Brandon will describe the polar seas, how they work, and their global importance. He will show how research has fed into polar broadcast and how using the series co-produced by the BBC and The Open University, we can teach science to millions. Components of our television broadcast with real time polar data, can even be utilised by distance learning students to learn basic science and get the best possible understanding of what is happening there right now.

Looks like being another resource to add to the Climate Change folder.
Check in here to see the lecture live.