on January 27, 2011
One of the findings of the recent trip to Salzburg (did I mention that ?) was a project which was connected with one my colleagues on the trip...
It's a documentary called Silent Snow (referencing the classic 'Silent Spring') and looks at the spread of toxic chemicals into the communities of circum-polar lands, and other locations, despite the chemicals being banned many years ago.
This is affecting their health.
DDT is banned in many countries, but is still being used in Africa.

The website has a link to a trailer for the film.

The Silent Snow project
The Silent Snow project aims to raise awareness of this problem and consists of both a short and a feature length documentary by Jan van den Berg, educational material for schools and this website. In the short film the subject is introduced by following two young girls in Greenland and the way in which they are confronted with the pollution of their environment.
In the feature length documentary a young Inuit woman travels around the world looking for the causes of this pollution. As such the film highlights not only the consequences in the polar region, but also the causes and dilemmas, such as the use of DDT against malaria in Africa. This film will premiere in February 2011 in Nairobi at a conference organized by UNEP.
This would also connect with this impressive student project on climate change: 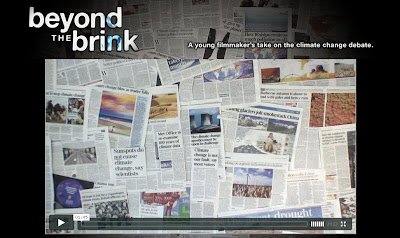 Beyond the Brink Silent Snow