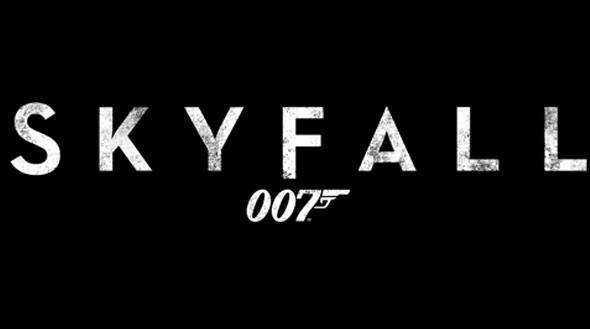 Out to see Skyfall: the latest Bond movie a few weekends ago.

Here are 007 ideas (do you see what I did there ?) for teaching about James Bond and Geography....

1. There's an Atlantic Cities post which introduces the map of Bond locations.
The James Bond map - research some of the locations here - add the Skyfall locations
Could you add the locations from the latest movie here, or work out where those are on a map ?

2. There's been a great deal of James Bond merchandising, such as Coca Cola.. 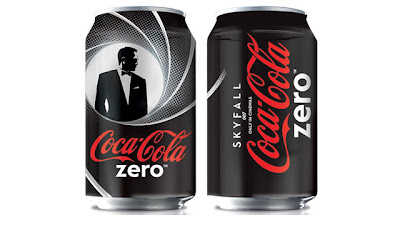 You may also have noticed that Q uses a Sony Vaio.... I presume Sony paid for that particular 'product placement'.... (either that or Q can't afford an Apple Mac....)

Can you come up with James Bond / geography products that could have been placed in the movie, or some geographical merchandise ?
Perhaps some 'I've been to Skyfall' postcards...

3. The James Bond promotional game which I mentioned in a previous post - useful for getting students onto Google Earth and trying some of the tools... The competition element is closed but you can still play for fun (or for learning....)

4. Why not design an HQ for a James Bond villain on Google Earth. Noel Jenkins has previously planned an activity similar to this which made use of Google Earth's submarine imagery (don't forget this) to plan the location for an underwater lair....
You could also use Google/Trimble SketchUp to build your lair. Remember that there's plenty of advice on how to use SketchUp at the Google Teacher Institute site.

Spoiler alert !
5. One of the plot lines features the London Underground. There are some tense scenes as Bond pushes through overcrowded platforms heaving with people, and yet is able to move through the carriages inside and open all the connecting doors... (don't forget to suspend disbelief...)
Research the other 'lost' or hidden stations on the London Underground
Perhaps produce a 'Bond' line for the Underground. The tube map has previously been used to add artists, teachers, bands and a huge range of other cultural elements.... The Great Bear, for example, by Simon Patterson.

Perhaps there could be a tube line with the bond girls, or the villains, or the cars/gadgets/gimmicks in each film...
"A return to Pussy Galore please..."
Get hold of a blank London map for this - there are several online.
Perhaps this could be an opportunity for urban regeneration too, with the closed stations reopened for some new use....

There was also a map of London at the centre of a key scene in the film, when 'Q' decodes a virus planted by the main villain of the film.

6. A useful set of images and captions from Klaus Dodds. The full article about the geopolitics of Bond is here.

Geography is critical to the James Bond series. When Ian Fleming invented the superspy James Bond he did so writing at his home Goldeneye in Jamaica. Having been a wartime naval spy, Fleming was eager to convey a strong sense of intrigue and excitement. Bond could not have any old mission. He had to be seen to be travelling to interesting and indeed exotic places that most of his western readers could only have dreamt about.

Is that still possible in the days of global travel ? Perhaps that's why familiar locations are re-presented in the latest film ?

7. I was a little stuck for the 7th idea, so I put out a tweet to ask for suggestions from my network...

Here are some of the excellent suggestions which I hadn't thought of, and which were in some cases better than the ones I had...

- create a map of the countries that James Bond has visited - this could be done using the Big Huge Labs Map Maker perhaps
- could then compare this map with staff at the school or students from a group - who has travelled the most like Bond ? (perhaps Miss Map-a-penny)
- explore James Bond Island - also called Khao Phing Kan
- create a list of the key information that people who have never seen a James Bond film should know to ensure that their critical literacy is brought up to date (a la E.D Hirsch)
- explore locations used in earlier films such as the oilfields of Baku in Azerbaijan - how have they changed since they were featured in the film
- investigate different ice roads e.g. Ice Road Truckers - where are rivers used as roads ?
- what is James Bond's carbon footprint ? how could it be reduced ?
- explore Glo-Bond-isation - the spread of the travels, but also the franchise...

Finally, thanks to Oli Mould for sending through a link to an island off the coast of Japan which formed the main location for a crucial scene in the film with the villain. The amazing island is called 'Battleship Island' because of the way it looks (see the image below) or Hashima. 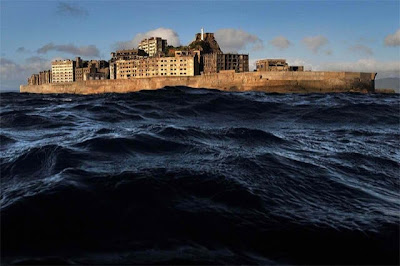 One for the Urban explorers....

Perhaps the Sandy Island that was in the news was actually the hideout for a villain who then moved it as he'd been discovered ?

Feel free to add further ideas below as comments....

Update
It's been suggested that we should also mention issues of gender, morality and inequality, particularly in the nature of the relationships that exist between the characters. Does James Bond always act appropriately ?
James Bond