on January 17, 2018
I'm finally able to announce something which I've had to keep to myself for the last 7 weeks or so...
Back in October 2017, I put in a speculative application to join an illustrious group of people who are selected each year to work with the wonderful folks at the Ordnance Survey to encourage people to #GetOutside and enjoy exploring the amazing variety of countryside that we have in our country (possibly guided with a classic Ordnance Survey map in paper or digital form).
In early December, I received the following e-mail: 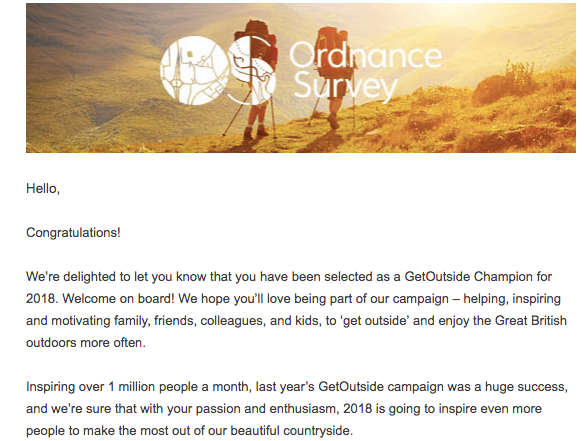 There were almost 500 applications last year apparently, and the final list for 2017 included a fair few adventurers, explorers and people who spend their lives in the outdoors, and many of whom are known to millions through their media work. This included Ben Fogle, Sean Conway, Kenton Cool,  Jason Rawles (founder of the Adventurers' Club), and the amazing Sarah Outen.
There were also people who share particular aspects of working outside, or who blog about the outdoors and spend a lot of their time outside, including the Meek Family who were big fans of our Mission:Explore book. There were also people who loved walking, climbing, swimming and other activities, and wanted to share their love of them.
I thought that with my teaching role, my Mission:Explore role, my involvement in fieldwork (I co-wrote a book on it you know) and local place and landscape investigations that I might have something to offer.

This coming year is therefore going to see me getting outside even more than usual, and encouraging everyone to take part in outdoor activities (including pupil at my school, and other schools that I visit), some of which I already have ideas for and others which will no doubt emerge as the year develops, perhaps in collaboration with other Champions. I've enjoyed reading the blogs and tweets from last year's Champions, particularly as they have been reflecting this month on the year just gone and what they have gained from it.

I've been thinking of a few things that I want to achieve during the year, and will be telling you more about those over the next 12 months here on LivingGeography.
I'm looking forward to an event next week when I'll be meeting up with the other champions and finding out a lot more about what we are going to be doing.
I know already that a very good friend of mine is also going to be involved - he'll tell you about his involvement himself.

Here's one of last year's Champions' next venture for example - though I don't suppose I'll go quite that far...

Looking up. In just a few months I will be attempting to climb to the summit of Mount Everest. A slightly terrifying prospect for someone afraid of heights. The hard work towards the 8848m summit has already begun..... pic.twitter.com/dQhWFKOLnK
— Ben Fogle (@Benfogle) January 2, 2018