on April 30, 2018
Thanks to STP Geography for the tipoff to this story. 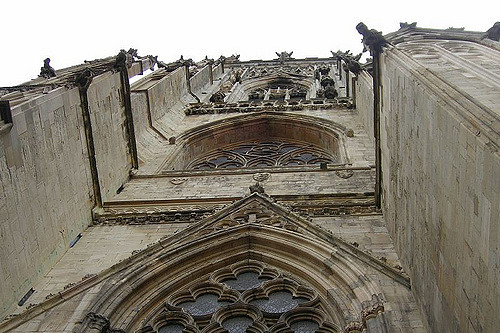 My family all live in York, and I've visited many times over the last 40 years or so, as several friends also went to York University.
From the York Press article here.

THE city council is about to switch on groundbreaking technology on York roads in a research project which uses mobile phone data to help tackle congestion.
Road-side sensors are going in on the A59 corridor - starting at Lendal Arch - and last week the Department for Transport handed over the first tranch of a £2.85 million grant to roll it out more widely.
The A59 research project - called Eboracum - sees data from mobile phones and smart cars, among other things, used to track congestion and model traffic flow, to help the city council deal with congestion. It has been funded by a £450,000 government grant and the other £2.85 million grant - first announced last October - will let the council work out how that kind of data can be used to model traffic flows and tackle congestion. Last week, the DfT released the first £682,000 of that money.

As of April 2018, six sensor sites on the A59 towards Harrogate between the city centre and its boundary will extract data from vehicles and their drivers’ mobile phones for analysis by the council’s monitoring officers. The data, which will be collected anonymously, will be used to help make better decisions about traffic light patterns, to make the roads run more smoothly and speed up journey times. Decisions will be at first be taken by council officers but in the medium term this will be done automatically.


As always with newspaper stories where comments are switched on, there are some interesting comments, which should perhaps be displayed with caution in case there are some abusive ones. These are at least 'authentic' and represent some real opinions (one imagines)