Chris Heffernan on the value of Geography

on July 03, 2019
Chris Heffernan is a geography educator in the USA. He was one of the people behind #worldgeochat.
He has been writing about the value of geography for some time.
This piece is from 2017, but I've only just found it. 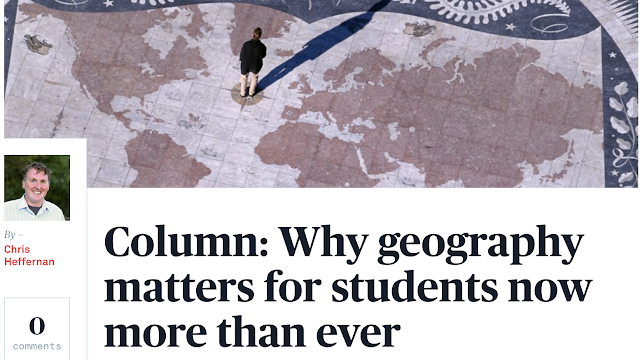 "Geography matters more now than ever because students need to know human geography. They need to understand the relationships that exist between cultures. They need to see not just the differences in cultures, but the similarities. Students need to know that the kid sitting in a school in Afghanistan today probably doesn’t speak the same language, practice the same religion or live in a home that looks anything like a student in the United States, but they have a lot of things in common. They both love their families, the both want to play and they both want to learn. When we focus on the similarities instead of the differences, it changes the picture."
Chris Heffernan GeogChat Geography Pedagogy USA