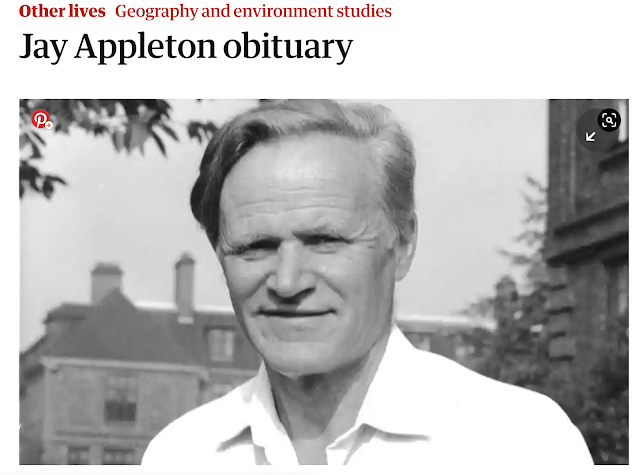 I'm reading 'Losing Eden' by Lucy Jones at the moment, and the Geographer Jay Appleton is mentioned early on the book with his 'habitat theory'.
She mentions Appleton's theory of proximity and refuge.

Some details of Appleton's work here.
Read more about the theory in this piece in Ernest Journal.

It turns out that Appleton's work on landscape and his later poetry was important in other ways. He was friends with Julia Bradbury who appreciated his work on landscape change.
I came across this video and other information on his work. He wrote a report on disused railways.

Jay was a British geographer who proposed ‘habitat theory’ and advanced the notion of ‘prospect-refuge’. The theory states that taste in art is ‘an acquired preference for particular methods of satisfying inborn desires.’ The two desires are for opportunity (prospect) and safety (refuge). Tracing these two desires gives us a means of understanding successful and enduring aesthetics, and the ability to predict the same. “Jay and the Bradbury family became firm friends after he wrote the most moving letter to Julia following her Railway Walks series.


More on the idea - the second hand book is extremely expensive and hard to find. I'll keep my eye out for a copy:

Having established, then, that there is much evidence to show that at both human and sub-human level the ability to see and the ability to hide are both important in calculating a creature’s survival prospects, we must next see whether we can find some means of erecting a system for classifying the components of landscape according to this simple principle, whether or not they are conductive to the observer seeing and hiding. Where he has an unimpeded opportunity to see we can call it prospect. Where he has an opportunity to hide, a refuge. And just as we can identify the desire to see without being seen as something conductive to, but more limited than, the desire to satisfy all our biological needs, so we can recognize its aesthetic basis as the more limited than the aesthetic basis of that more comprehensive ulterior objective. To this more limited aesthetic hypothesis we can apply the name prospect-refuge theory.