Augusta - the Masters and some geographical angles... 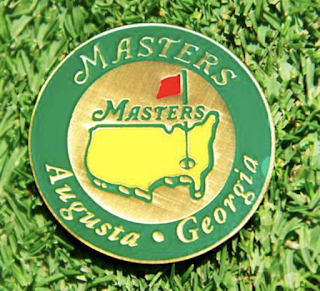 One of my favourite sporting events of the year is the Masters golf at Augusta.
It is very much on my bucket list to sit at one of the par 3 holes on the course on a fold up stool, and watch the players come through, listening to the birds and smelling the flowers.

This year, as in previous years, there is only very limited coverage for those who don't want to pay Sky lots of money. I shall be up late on BBC2 watching the meagre pickings that are left from pay per view.

Paul Berry - a keen golfer himself - set me off on the trail of some geographical connections with his excellent blog post on his DevonGeography blog which explores the importance of the guides to the greens that the caddies all carry to help the players with their approach shots and putting. It's a reminder of the cartographic nature of these resources, and how golfers (like walkers) need to place their faith in the maps. At the Masters, these books are not allowed to be used, so golfers have to navigate using their own experience, and that of their caddies perhaps.

In 'The Daily Telegraph' on Friday this week, there was a feature on the Masters, which I took out of thestaff room copy. It was interesting as it was exploring the impact of the pandemic on the economy of Augusta, and also the contrast between the glory of the golf course and the rest of Augusta, which has apparently been called 'disgusta'.
Here are some scenes from the course, for those who have never seen it:
The Telegraph article visited Augusta, birthplace of James Brown, the Godfather of Soul. It describes the city as "a ghost town suffering a financial catastrophe caused by a patron-free spectacle" (spectators at Augusta are called patrons). They normally spend millions on merchandise, which is limited access, rather than available freely online.
Estimates are that the city has lost $100-$150 million from the loss of the tournament's usual patrons. During the tournament, around 200 000 people visit the city, which is more than the usual population of the city. Restuarant owners refer to the tournament as their "13th month" as they make so much money from customers and visitors.
Access to the course is via badges, some of which are for sale on the 'black market' at inflated prices.
Others make money from renting out their houses to visitors, just as those close to the All England Tennis Club usually make lots of money during Wimbledon fortnight.
This article is slightly more positive.
I may explore this a little more...
Augusta Covid-19 Inequality Golf and Geography Masters Golf Sense of Place Tourism USA