The tragedy of the loss of ERASMUS

As a geographer, it's clear that I would only ever see leaving the EU as a terrible decision.

No country prospers without connections with others in the modern day. Great Britain may have prospered in the past by stealing the resources of other countries and colonising them, but that's no longer an option that sits well with the international community. Interdependence trumps independence.

One of the real tragedies of the proposed deal (which has not been accepted yet by the UK Parliament) is the loss of the ERASMUS scheme. The school where I teach has had significant involvement in ERASMUS, with seven projects, including three I have been personally involved in co-ordinating on behalf of the school. These have involved hundreds of students in visiting a range of countries including Spain, Sweden and Reunion Island (France), and connections being made with academics and colleagues in other schools and universities in a range of European countries.

Prior to that, I also took part in a great many ERASMUS funded projects which took me all over Europe and connected me with hundreds of inspirational colleagues: students, teachers and academic geographers. I was able to work numerous times at Salzburg University, learn from Finnish colleagues about their work in the outdoors, discuss curriculum development with Turkish colleagues in the heat of the Alentejo and walk on an ice-bound lake on the Slovenian border.

My colleague Esmeralda Salgado (MFL colleagues should follow her on Twitter here) has shared her own ideas of why ERASMUS needs to be retained. A petition has also been set up and is waiting for approval before being available for signing - hopefully before the end of the year.

Read Esmeralda's blog post on the loss of ERASMUS here.

Here's Julian Baggini on his own experiences of ERASMUS. 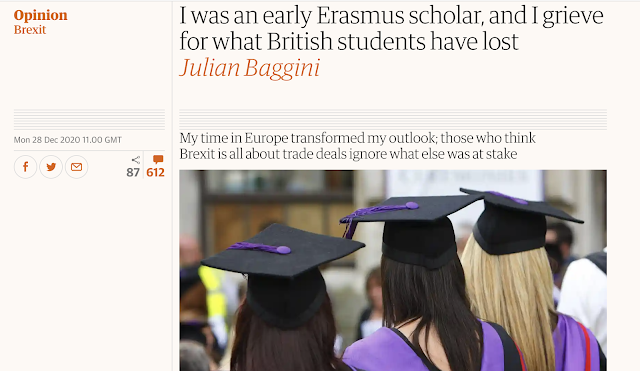 Thanks to Covid, the neighbours haven’t been round for Christmas this year, and thanks to Brexit, in future we’ll be spending less quality time with our European neighbours too. The walls are going up again and no amount of trade windows can compensate for that.

From what I've seen, the proposed Turing Scheme replacement will not be a replacement. It doesn't include the same features as the original in any way, or focus on all the Key Actions that ERASMUS does, or require reciprocal travel, or target the same people...

I will enjoy the remaining years which are left on the ERASMUS projects we are currently completing - albeit virtually - and fingers crossed for our final application on a project which developed from the Covid-19 pandemic and responses to it. I also hope to continue to be involved, as an external consultant, on future projects, and perhaps there will be some opportunities to be involved on behalf of other European countries.

There will be other unintended negative consequences doubtless. (When you read (and I checked) that the partly cut and pasted Brexit UK-EU deal references Netscape Communicator 4.0 as a suitable web application. It was discontinued in 2006.

Thanks to #Brexit, the Falklands now faces a 6-18% tariff on EU-bound exports:
—‘The situation for the Falkland Islands is crucial since fisheries contribute some 90% of exports sent to the EU, 40% of GDP and some 60% of the treasury's revenue.’ https://t.co/3CJv8WneL2 https://t.co/uhxG3umLQZ

Here's Professor Alison Phipps from the University of Glasgow:

"Erasmus: the life-mind-heart expanding glorious adventure into freedom, responsibility and myriad ways of knowing and speaking the world. Wanton theft of this peacemongering freedom isn’t so much a deal as a cultural mugging of young people. Cruelty is the point again.”