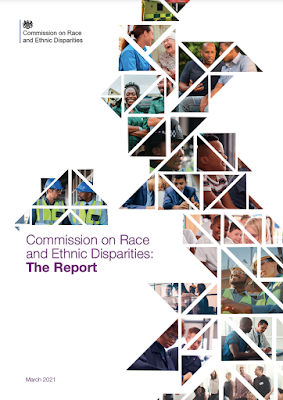 Last updated 16th April 2021
There has been a lot of media (and social media) coverage of the Sewell report, which was published last Wednesday, just ahead of the Easter weekend. It has received some coverage from within the geography community, and those who want to encourage teachers to investigate their own curriculum.
I need to preface my comments here by saying that I am a white middle-aged man, and can't really understand what it feels like to be brought up in the UK and face the lived reality of being part of an ethnic group other than White British.

The report was published by the Commission on Race and Ethnic Diversities, and was set up following the Black Lives Matter protests which began in May 2020 following the death of George Floyd. The trial of Derek Chauvin is ongoing as I write this.

Download your own copy here, it runs to over 250 pages.

(PDF download)
The headline result in the newspapers and media related to the overall finding that the UK was not insitutionally racist.

Several Twitter accounts working in the sphere of decolonising geography called on 'the GA' to respond and to denounce the report, partly because of the word "geography" being used to explain why race was not a factor in disparities of outcomes.

My personal concerns initially were initially less to do with the use of the word "geographical" to refer to actual geographical distributions of inequality, but with the overall conclusions, and the implications. However, as Tim Cresswell has pointed out:

The word geography appears 19 times in the report. The function it repeatedly serves is to suggest that there are reasons other than racism or ethnicity for inequalities in the United Kingdom.

Steve Puttick and Amber Murrey share their views on that in this piece. I need to find time to read the whole report and the particular ways that geography is referred to and perhaps misrepresented when time permits.

A recent addition to the debate by Tim Cresswell, who is better placed than me to comment on what he calls "spatial fetishism" can be read here. This will be part of my own reading to educate myself.

Victims of Geography?: On the Spurious Use of the Word “Geography” in the Sewell Commission Report. https://t.co/gejDegzk9S

People better qualified than me to question the conclusions, and point out the likely implications of those conclusions have written and spoken about their concerns: three in particular to begin with.

Firstly, Alan Lester, Professor of Historial Geography at the University of Sussex has written a piece on the Decolonising Geography blog with his impressions of the report.

David Olusoga, historian and broadcaster, has written a number of pieces since, including a 'Journal' piece for the Guardian on Saturday calling it "historically illiterate".

Dame Doreen Lawrence is the third. She is rightly concerned about the impact this will have on the fight against racism.

The report also refers to the use of the term BAME as being problematic, although it then fails to follow up on its suggested alternative terms by reverting to the term "ethnic minorities" numerous times, which is equally problematic in terms of identifying specific groups in specific contexts. This is also a concern for teachers when teaching - what are the acceptable word to use which will avoid offence?

There were also suggestions that the report used cherry-picked data.

Some people who were quoted as being part of the report's consultation were also surprised to be mentioned as they didn't agree with its findings and didn't feel they had been properly consulted or their views appropriately represented. Here's an example:

Just found out that I am cited in a *highly misleading* way in the #SewellReport. It uses my research to try to argue that stop and search is an effective way of reducing drug-related crime. I hope our abstract speaks for itself...

The intellectual dishonesty is astonishing. pic.twitter.com/3AE9jTFNNI

This BBC piece suggests that perhaps the controversy around its conclusions was part of the plan around the publication of the report. Distraction has certainly been used before when findings about the Government's alleged misuse of public money, or the private life of Boris Johnson. Data on police stop and search and related arrests along with proportions of the prison population are enough to suggest a problem.

I am particularly concerned by the suggestions in this Observer piece about the need for a 'compulsory' school course to be taught in British schools with a textbook - a tactic which apparently has worked well in Russia. As Alan Lester says in his piece:

The Report seems to be for teaching a grand pretence: that the British Empire was a way of encouraging people of colour around the world to feel included in Britishness. “We want all children to reclaim their British heritage”, the authors claim, making it seem as if that British heritage was something voluntarily acquired by Black Britons’ ancestors. In effect it says: let’s pretend that the British Empire peacefully extended the benefits of Britishness to people of colour. Never mind all that unpleasantness.

The Windrush Scandal was enough by itself to show that there are issues with institutions in the UK. I have spent quite a bit of time this week working on a new unit for our students using Benjamin Zephaniah's 'Windrush Child' as a reader and source material for all students to have access to. The destruction of evidence of citizenship was done by the state. Politicians ordered the vans with 'Go Home' messages on them. Delays to sorting the issues led to premature deaths and misery for thousands - inflicted on people who had given their lives to public service and the NHS and helped create the multi-cultural London which welcomed the world in 2012. How much has changed since.

Changes to immigration law in 2012 meant those without documents were asked for evidence to continue working, access services or even to remain in the UK. Some were held in detention or removed despite living in the country for decades, resulting in a furious backlash over their treatment.

The idea that it is published to distract attention away from other things is also fairly obvious as well.

Meanwhile police resources were deployed at the weekend to protect statues of Winston Churchill.

Other sides of the argument have been made by some educators, including well known headteachers. Many bodies quoted are distancing themselves from it.

Worth reading Kenan Malik's piece in yesterday's Observer for another perspective.

This is definitely not my usual geography-related post, and there have been few similar in the 10 000+ on this blog, although this issue is definitely one that geographers need to be concerning themselves with, and they have a number of accounts worth following in this area to help point them in the direction of suitable ideas and resources to educate the subject community appropriately.

More on these accounts in the next issue of GA Magazine's 'Webwatch' column as well.

See also the pathway in the GA Conference.

So, this from a Downing Street source: "No other Govt report in recent memory has had its evidence & analysis so comprehensively #discredited as the Commission on Race Disparities. Number 10 failed to grasp the issues & isnt motivated by what can be done." #GoFigure #Sewell

Another CRED to check out is the Centre for Race, Education and Decoloniality

They offer an Anti-Racist School award - see their Twitter feed for more details.

Comments welcome. This is posted in a personal capacity.

Another useful blog from the Decolonising Geography blog.

Researchers Kaveri Qureshi and Nasar Meer respond to last week’s report by the Commission on Race and Ethnic Disparities by providing much-needed context for geography teachers and other educators seeking a better grasp of the scholarship around how outcomes in the areas of health, family dynamics, and the labour market become racialised
Written by Kaveri Qureshi and Nasar Meer
Reposted from the RACE.ED blog.
Susan Pike, in her GA Conference Lecture on the 8th of April 2021 made it clear where the GA stood on this.

Important that GA President @SusanJPike has chosen her Presidential lecture as a moment to make clear that @The_GA does not agree with the UK Government report on Race and Ethnic Diversity's conclusion that structural racism is not present in our society today.

She also mentioned the Voices Project, which the GA is supporting with funding and which we shall follow through the coming year. 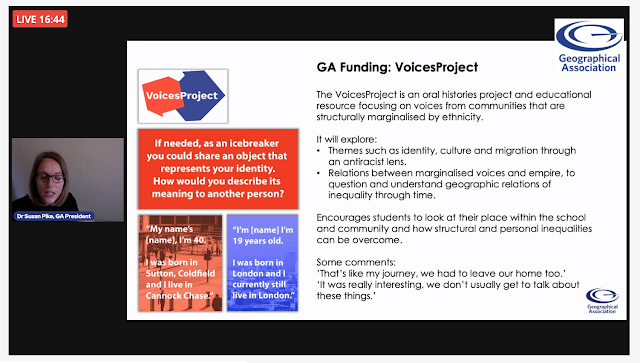 And this report in the BBC today suggests a lot of Downing Street interference
https://www.theguardian.com/uk-news/2021/apr/11/downing-street-rewrote-independent-report-on-race-experts-claim
Updated 16th April
I have been very impressed with Aditya Chakrabortty's writing on the Pandemic's impact on people.
Here he discusses the report.