People of a Feather

I became aware of this film via Felicity Aston. 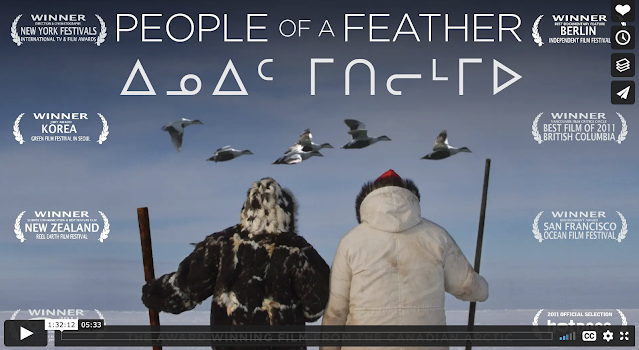 She is currently living on Vigur Island in the north of Iceland, where she is working, amongst other things, to collect and process the down which is left in the nests by the eider ducks after they have laid their eggs and reared their young on the island. The nests are now starting to be made for this year's season.

It is a film, which explores the people who live in Canada and similarly rely on this animal for some of their income, and also culturally.

Featuring stunning footage from seven winters in the Arctic, People of a Feather takes you through time into the world of the Inuit on the Belcher Islands in Canada's Hudson Bay. Connecting past, present and future is a unique relationship with the eider duck. Eider down, the warmest feather in the world, allows both Inuit and bird to survive harsh Arctic winters.

Traditional life is juxtaposed with modern challenges as both Inuit and eiders confront changing sea ice and ocean currents disrupted by the massive hydroelectric dams powering New York and eastern North America. Inspired by Inuit ingenuity and the technology of a simple feather, the film is a call to action to implement energy solutions that work with nature.
Here's the trailer, and the full film can also be found on VIMEO as well:
It's made in association with the Arctic Eider Society.
Canada Eider Down Felicity Aston Films People of a Feather Vimeo