I've spoken and blogged about this book many times, and you can now listen to extracts from it on Radio 4 as it has been selected, around 35 years after its first UK publication as the 'Book of the Week'.

A heads-up that, to my delight, Barry Lopez's masterpiece Arctic Dreams (1986) will be Book of the Week on @BBCRadio4 this week, starting 09.45am today.
The book––and the writer––that made me a writer.
Barry passed away in December this year.https://t.co/Eo8vKQKIV0

Barry Lopez is someone whose work has been important to me throughout my career.

Catch up with the episodes here.

In Episode One of Arctic Dreams Barry Lopez reflects on his first encounters with the surprisingly varied and resilient inhabitants of the polar north and on modern man’s vexed relationship with this beguiling continent. In his breath-taking natural, social and cultural history of the Arctic, Lopez reveals the essential mystery and beauty of a continent that has enchanted man's imagination and ambition since time immemorial. 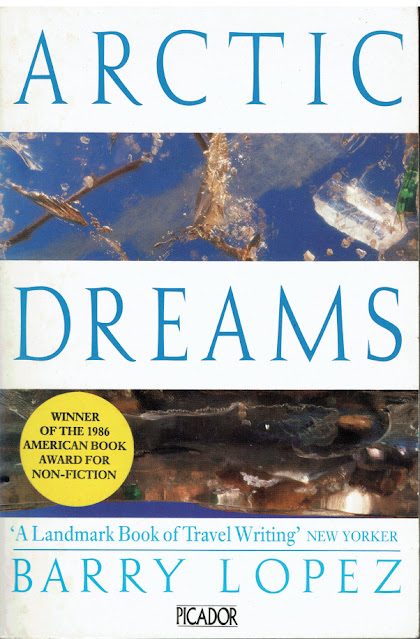 Written well over a quarter of a century ago, Lopez's visionary account of his journey across the polar caps is a celebration of the Arctic in all its guises.
A hostile landscape of ice, freezing oceans and dazzling skyscapes, home to millions of diverse animals and people, it is also the backdrop to massive migrations by land, sea and air and the setting of epic exploratory voyages.
In timeless, prophetic prose, as meditative and memorable as the land it describes, Arctic Dreams poses fundamental questions about how we should cherish our ever more vulnerable planet.
Arctic Dreams was written by Barry Lopez.
It is read by Kyle Soller and abridged by Richard Hamilton
This edition is the copy I have, as described in this blog post on City of Tongues.
I bought it from the Hull University bookshop in 1986.
The first episode ends with a reminder of the name that we are given by people of the Inuit: "the people who change nature".... and not in a good way....
Arctic Arctic Dreams Barry Lopez Book of the Week Culture Landscape Narratives Radio 4 Robert MacFarlane Stories Travel Writing