End of the line

on June 13, 2021
I trained as a teacher at Hull University and spent the year living in the city in Park Avenue on the edge of Pearson Park. At this stage in the 1980s, Hull was an important fishing port, and boats operated out of the docks. Over the years, the industry has meant a lot to the city, and generations of families have relied on fishing for their income. 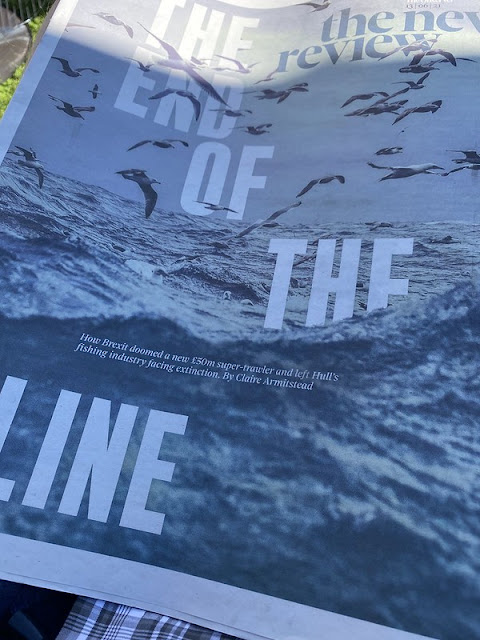 I also worked for twenty years in King's Lynn, where I taught the children of people who lived in the 'North End' and worked out of the Fisher Fleet, fishing for brown shrimp in the Wash and cooking them up as they travelled back to shore for sale along the coast and elsewhere, or langoustines which were exported to the continent.
In the run up to the Brexit negotiations we were told that fishing would be easier and that we would "take back control" of our waters... although most of the fish that was caught was sold to Europe still, and the required paperwork would actually mean fish rotting on the way because of delays - so much for getting rid of red tape.
An industry that was worth just 0.12 of Britain's economic value was also disproportionately mentioned in trade negotiations.
A long piece in today's Observer tells the story of the impact of the last year on the fishing industry, and the impact of the bungled Brexit negotiations where agreements were signed which had not been fully understood by those who signed them, despite the advice of experts who could see exactly what would happen and repeated reassurances from politicians.
Brexit Fishing Fishing Industry Hull