Does Climate Change have benefits? 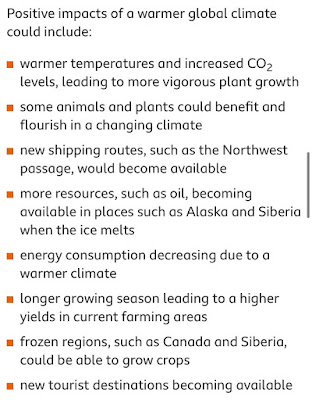 This was a question which was discussed earlier in the week. There was a page on the BBC's Bitesize page which included some positives of climate change. Given some of the news that has been coming out of Canada and a number of African nations currently, and the accelerating nature of negative impacts that we have been seeing, some on social media were critical of this.

Some of those positive impacts are shown here on the right. As you can see some of them are rather problematic: particularly the opportunity to extract more oil from Alaska and Siberia, which would not be in the best interests of the planet - although it would be a financial benefit for the shareholders of the oil companies in question.

Some people forwarded details of the page, which had been there for some time and suggested that the GA should be contacting the BBC about the inclusion of such a resource.

Other groups also got involved in the debate around the page and whether there could be any benefits of climate change.

As you can see below, the result was the removal of the page within a few days. Did XR do it? 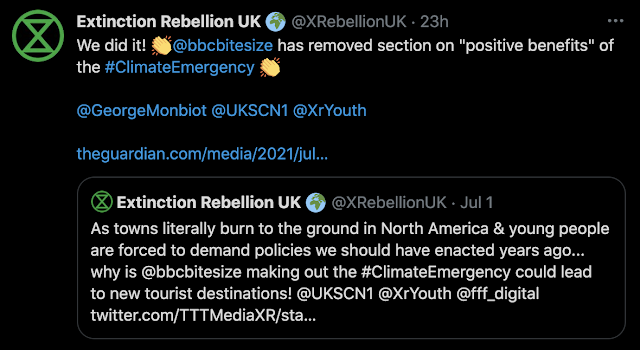 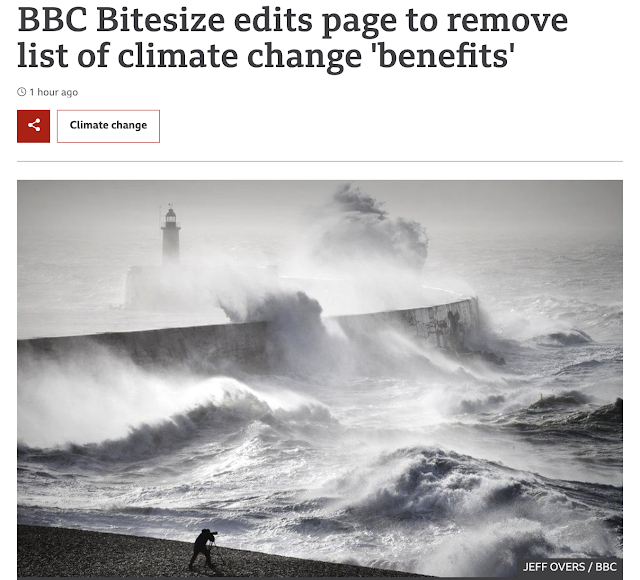 Part of the issue here is one connected with the pace of change and also the framing of the content as well.

As a textbook author it's worth mentioning that some of the exam specifications require students to consider some of the benefits of climate change. The Changing Climate chapter of the OCR 'A' and 'B' textbooks include a diagram showing the way that warming climates in the UK will result in a climate which is ideal for growing grapes, for example. For those viticulturists who are winning prizes for their wines, and growing a new profitable business, in some cases with some sustainable credentials, this could be framed as a positive.

I think a key issue here is with the relative rate of change that we are seeing. Changes in temperature which were previously said to be happening 'by 2100' have been brought forward to 'by 2050' and may even occur 'by 2030' in some cases. This is not in some long distant future, this is within our lifetimes and those of our children, and not just our grandchildren. What might be seen as a positive in the short term cannot compensate for the many negatives which will come crowding in on us as tipping points are reached, and the heat changes everything we have known over the medium to long term.

There is also an important point to be made about climate anxiety and the connection with the idea of hopeful geographies, and the need to push this to the back... but also being pragmatic about the possibilities which are becoming firmer as time passes.

To finish, Rob Chambers shared an important point about the nature of our housing and other buildings - something which was relevant in Canada of course.

This was a piece in 'The Conversation' which is an essential source of up to date and authoritative pieces. One has to be an academic in order to constribute to the site (I know, because I checked as I thought about writing something). So let's imagine that you are a builder, an installer of air conditioning, heat source energy pumps, energy efficient glass etc. This will provide you with employment. Some of those changes as houses are retrofitted and new houses designed appropriately, could also be framed as a positive for the people involved.

There will also be a need for chartered surveyors, energy inspectors etc. all of whom will help ensure that we transition our lives in an effort to reduce the worst of the effects....

Are there positives to climate change? It's one to discuss with students perhaps.... Mine are almost fifty years younger than me, so perhaps they should be the ones deciding as they'll live with the consequences for longer.