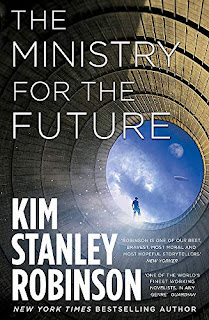 The book 'The Ministry for the Future' by Kim Stanley Robinson begins with a terrifying vision of a future India which is affected by a heatwave. As temperatures build, air conditioning units begin to fail, and the temperature moves to the point where human bodies are unable to cool themselves down. People take refuge in a lake, which heats up and essentially boils them alive as they are unable to find any refuge from the heat.

Alistair Hamill tipped me off to this useful and scary piece on the issue of thermal comfort and safety.

The heat waves in the NW of N. America at the moment give us a salutory warning: we are reaching the limits of the kinds of temperatures humans can live in.

This article explains why and outlines some of the steps we must take to adapt to this. https://t.co/dTa6Ir5Wh2 pic.twitter.com/mtBKaJ28iA

When I was first teaching, we had a range of wet and dry bulb hygrometers we used to use for fieldwork around the school site in an activity we called 'where can I eat my sandwiches?'. The muslin around the bulb was soaked in water with a small reservoir to keep it wet. The difference between the temperatures on the devices was significant.

The last few days have seen further examples of cities which are getting close to becoming uninhabitable for humans.

India has a number of cities which are getting close to this point including Jacobabad.

This piece on how the heat domes exceeded the worst case climate models is scary.

Coincidentally this morning, there was a useful twitter feed on this.

Quick 🧵 on wet bulb temperature and why it matters for human survivability.

To understand this, first some facts about the human body. To survive, humans need to keep their body temperature within a few degrees of 98°F.