Geography teaching resources and other thoughts...


Just after 7am on Friday morning I pulled into a multi storey car park in central Coventry. I had set off rather earlier than I needed to ensure that I was on time for an NQT event that I was running, and as I checked my mail and Twitter feeds, news started to come in of an earthquake and tsunami...
The rest of the day was spent running the conference, and by the time I got home at 7pm that night, there was a clear sense that this was going to be very bad news for Japan and the rest of the world...

It became obvious that a lot of colleagues were hard at work over the weekend preparing a range of resources.
My colleague Anne Greaves at the GA had produced a really useful page of materials at short notice on the Friday in my absence.

Below is the text of the update that I will send to Anne for addition to the GA website tomorrow (Monday) but it is here for early access, and also for possible comment... This is a draft, and is my personal response to the events in Japan...


The weekend of the 12th and 13th of March has been dominated by regular updates from the region of Japan that was most badly affected by the earthquake of the 11th (which has been upgraded to a magnitude 9) and the ensuing tsunami and aftershocks.
The force of the earthquake has shifted the east coast of Japan by 2.4 metres, and even shifted the earth’s axis by 25cm. News footage has shown the astonishing scale of the devastation, and the power of water in a highly urbanised area. Entire towns such as Minami Sanriku seem to have virtually disappeared, and tens of thousands of people are missing at the time of writing, in the massive debris fields that the tsunami left behind.
The crisis has now been called the “worst since World War 2”, with the astonishing power of the water and shaking accompanied by the potential for a greater nuclear disaster than Chernobyl in 1986. Videos showing the swaying skyscrapers of Tokyo also provide a reminder of the efforts that have been made to protect buildings from potential earthquakes. This, combined with regular drills will have had an effect on overall casualty numbers, although some of the videos show a remarkable nonchalance as people stood and washed boats being washed under bridges that they were stood on.
The combination of hazards has had wider impacts on the country’s economy, links to global markets, car exports and manufacturing have been suspended, insurance claims will run into billions, and there are forecasts of rising energy prices. Fukushima and Miyagi prefectures are responsible for over 40% of the Japanese economy, and most manufacturing has ceased. Food rationing is taking place, and water supplies are cut in many parts of northern Japan.
Energy is currently being rationed as a large percentage of Japan’s energy comes from nuclear power, and there are fears of nuclear ‘meltdown’ at a number of nuclear reactors. Screening centres have been set up as over 200 000 people have been evacuated from the area around the reactors. A rolling programme of 3 hour blackouts is planned for the next few days. Oil refineries have been affected, and many petrol stations have closed, with long queues at others.
In the longer term, there will be a stimulus for the construction industry, as the infrastructure and many buildings will require reconstruction, but this is a long way in the future…
Thoughts on pedagogy & potential activities
The challenge for teachers in the next few weeks will be to pick an appropriate route through the large number of potential resources and activities that could be selected. Teachers as ‘curriculum makers’ have difficult choices to make, and even more so than ever where this event is concerned.
Students are likely to come with questions, and anxieties, and teachers will need to tackle those sensitively. These are likely to form the basis for the response: a lesson that is planned too rigidly might not enable some of those important questions to be answered. Try to ensure that at least one computer with internet access is available for research. It may be possible to access the live news stream from NHK news: http://www3.nhk.or.jp/nhkworld/
Some sense of the scale of the disaster might be appropriate to explore, using Google Earth or other mapping software e.g. GIS mapping, perhaps using some of the available free tools such as ESRI’s ArcGIS online explorer: http://explorer.arcgis.com/ (a map of earthquakes in Japan has already been created)
Students could perhaps be placed in a ‘newsroom’ hot seat – maybe preparing materials for the Google Crisis Response website that is mentioned later in this resource. Alternatively they could be interviewing a survivor, or prepare questions for a rescue worker on their way to the disaster area. They might be asked to prepare / design applications that would be useful for residents and other people in the affected areas.
Use the Sky News home page or Newseum site http://www.newseum.org/todaysfrontpages/ to explore the front pages of newspapers in the UK / around the World.
Possibly a Wordle of the headlines could be constructed, to explore the language of tragedy, and how to work on some of these issues to raise the morale of people in the affected areas.
Alternatively, take a Japanese poetry form: the haiku, and pupils could write a response to what they have seen and heard, perhaps adding a hopeful note…
There could be an exploration of how the shape and height profile of the coastline of Japan may have funnelled the waters further inland and at a faster rate in certain locations.
Teachers should perhaps take a lead from students at the start of the lesson, to assess the possible focus for part of the lesson:
What do they know ?
What would they like to know ?
What should they know ?
If we are having a debate about core knowledge in geography, should ‘tsunami’ be in there ?
Remember geographical enquiry: the choice of stimulus material will be to identify appropriate images and then offer potential for research and reflection.
Is it perhaps too early to be dissecting the disaster ?
If any colleagues have thoughts on these ideas, or would like to provide further examples that they have planned, we would be very pleased to receive them and share them more widely.
Links and connections
The BBC News website has an astonishing video: one of many, showing the force of the water as the tsunami hit:
http://www.bbc.co.uk/news/world-asia-pacific-12725646

UPDATE: Watch the BBC NEWS SPECIAL on iPLAYER - thanks to TC for link


Some colleagues have been hard at work producing resources which they are happy to share.
Andy Knill, who teaches in Essex spent most of the weekend compiling a tremendously useful Google Document:
https://docs.google.com/document/d/1HFePGoc8m2zLIQDQEksKJqTMeqPJvpLGCzJLuQxCfSU/edit?hl=en&authkey=CMHrw5IH#
This contains a large collection of possible sources of information and Twitter feeds to follow for updates.
Becky Pook from Peacehaven School was quick off the mark with a creative and well-referenced resource which explored not only the physical background to the event but also the emotional response. It includes some interesting ideas for model making and creative use of images. Many thanks to Beccy for sharing.
http://www.slideshare.net/serrula/japanese-tsunami-11311
Japanese tsunami 11/3/11


View more presentations from Beccy Pook
Another Slideshare, which contains a range of images is: http://www.slideshare.net/effat57/the-japan-earthquake-and-tsunami
Ollie Bray wrote a blog post which concentrated on the effort of Google and other technology firms to update their imagery as quickly as possible to enable assessment of the damage and some before/after comparisons.
http://olliebray.typepad.com/olliebraycom/2011/03/post-earthquake-images-of-japan-google-earth.html
There was also a useful link to Google’s Crisis Response Dashboard: http://www.google.com/crisisresponse/japanquake2011.html - this provides a range of  links including a person finder and some dramatic YouTube clips.
Mark Howell blogged his thoughts – another example of the importance of teacher blogs:
http://markhowell101.wordpress.com/2011/03/13/floating-teaching-and-the-japanese-tsunami/
Some interesting thoughts on the issues of teaching a fast evolving news story.
Heathfield School, where blogging is embedded in the curriculum was also commendably quick off the mark with some Year 6 tasks – thanks to @DeputyMitchell on Twitter.
http://y62011.heathfieldcps.net/2011/03/11/earthquake-strikes-at-japan/
Jon Snow of Channel 4 news is writing his SnowBlog from Sendai in Japan: http://blogs.channel4.com/snowblog/
GeoEye: an image provider, has some useful Before and After images, which have been shared by the New York Times. The webpage has a useful slider to enable comparisons:
http://www.nytimes.com/interactive/2011/03/13/world/asia/satellite-photos-japan-before-and-after-tsunami.html?hp


The US Pacific Fleet has started an aid operation called Operation Tomodachi, and there is a useful Flickr set here from the people involved:
http://www.flickr.com/photos/compacflt/sets/72157626119790243/ 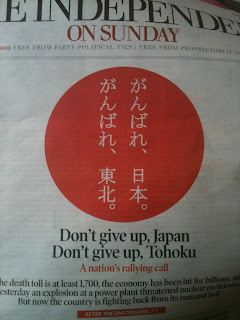 The UK charity Shelterbox is already active in the area, as are many other charities and international search and rescue teams. Follow the Shelterbox teams on: http://www.shelterbox.org/
James Reynolds (http://twitter.com/typhoonfury) travels the world filming in disaster zones and he has made his way to Japan as well as posting regular updates via Twitter. A useful ‘contact’ to follow over the coming days.
There was also the amazing story of Hiromitsu Shinkawa who was rescued from the roof of his house while floating many miles out to sea.
http://www.dailymail.co.uk/news/article-1365831/Rare-glimmer-hope-tsunami-ravaged-Japan-man-rescued-clinging-roof-obliterated-house-middle-sea.html
The story of the town of Minami Sanriku is a sober, large scale example of the power of nature…
http://www.dailytelegraph.com.au/news/minami-sanriku-the-town-that-disappeared-in-the-japan-earthquake/story-e6freuy9-1226020730156
Update: A Google map with links to a huge variety of imagery.
An excellent article in the Independent on Sunday (thanks to @MissTomitaka for the link) - I bought a copy of the paper today on the strength of the front cover, which was less sensational than the others...

I have not considered the nuclear events here, but there is certainly going to be a major review of nuclear safety and energy policy in the months to come...

Thanks also to many other colleagues, including John Sayers, James Baird, Kenny O Donnell and Tony Cassidy for their thoughts.

UPDATE: Thanks to Noel Jenkins for the suggestion of Google Fast Flip (which was a new one on me) for a rapid way to view a range of newspaper headlines for the Wordle task that I suggested above... This could also be used as a way of exploring the particular area of the story that was focussed on...
Update: Kenny O Donnell has posted his ideas
Update: Matt Podbury has posted his ideas - this makes use of Russel Tarr's FAKEBOOK resource - check out his SLIDESHARE resource too
Update: Discussion on SLN Forum and a WIDER DISCUSSION too


Finally, for those who would like to involve students in fund-raising, or donate to the disaster appeal.
Red Cross: http://www.redcross.org.uk/japantsunami
Earthquake Japan March 2011 Tsunami Tsunami

Andy Knill said…
A good stepping stone as you've said to a potential minefield that will be full of misunderstandings and preconceptions. Never had neighbours (adult) engage me in discussion about tectonics before!
13 March 2011 at 20:07

Alan Parkinson said…
Thanks for the comment Andy, and for the efforts you've made this weekend to make sense of the events and share your data mining from a range of sources.
The events are so huge that a range of scales from personal to global makes sense: the tectonic shifts impacting on tens of thousands of individuals - every floating car another story.
There is also the fact that in many schools there will be personal connections with Japan...
Anne will put her own stamp on the resources too by the time they go up on the website, but I've no doubt there will be lots of interest from colleagues...

There is still scope for plenty of additions:
- physical / human interrelationships
- cross-curricular ideas
- PSHE
...but as you say it's a stepping stone...
13 March 2011 at 20:14