on June 23, 2019
Chris Webster at the Geography Fieldwork Academy has been working on a new Fieldwork App, which takes the graphic style of the existing (and excellent) website and resources. Get it early and you will get it free, otherwise it will be a very reasonable (and affordable for students) 99p or thereabouts.
35 fieldwork activities have been automated for you.

The app includes a range of options for recording data. The phone will add a location to the place where data is collected and this is then exported in formats of CSV and suitable for inserting into ArcGIS Online and similar GIS tools.

An excellent new option for collecting, geolocating and exporting fieldwork data. It doesn't replace apps like Survey123 but fits well alongside them, and the nice simple interface means it can be used by younger students as well as older ones.

It uses many of the features of the later iOS, so won't work on some older models of iPhone.

The cost of developing and having such an app approved is considerable, so Chris has prioritised the most popular Apple app store first, to get the app out there. There will no doubt be other versions in time, and Chris hopes to have the Android version out within 4-6 weeks apparently.

This app needs to be installed on every geography teacher's iPhone. 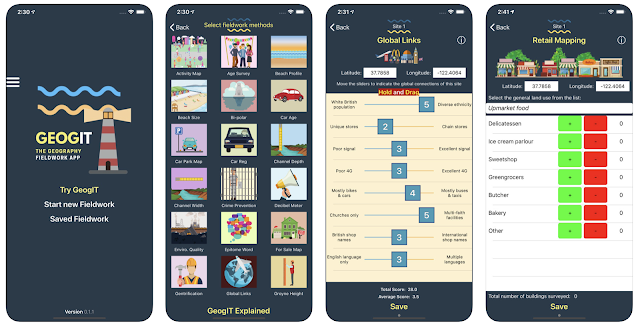