'Landscapes of Detectorists' from Uniformbooks

on July 06, 2020
"Alright geography degree, where should we be searching?"

I've been waiting for this book for some time, and it's lovely to finally hold it in my hand and flick through its contents before diving in. I didn't quite do a "gold dance" when my lovely postlady left it on the doormat and retreated two metres, but not far off.
'Detectorists' instantly grabbed me when the first episode of the first series was broadcast on the BBC on 2nd of October 2014. The week before I'd watched another wonderful Toby Jones performance in 'Marvellous' about the life of Neil Baldwin, so I was keen to see him in this new series too.
There was something calming about the series as it progressed, with the relationship between Becky and Andy, the banter about 'University Challenge', their random finds and changing relationships. There are so many small moments of joy (many of which make it into the pages of the book)

All wonderful vignettes making up a fantastic narrative, and pastoral first series, which was followed by two others. It also had the perfect ending for home-maker Andy and his family. The casting of Diana Rigg as Becky's mum (the actress Rachael Stirling is her daughter) was also a lovely touch.

As I was watching it, Jo Norcup and Innes Keighren were also watching, and later discussing it, and unpicking the themes and identifying a number that were geographical beyond the obvious "sense of place" and "landscape as palimpsest" that were perhaps clearer to the viewer, with the treasures buried just out of sight by people long past. There were also references to reading the landscape, Ordnance Survey maps and Google Earth.
Danebury's OS sheet is reproduced at the start of the book, just as it was glimpsed in the episode where Becky uses her geographical skills to suggest the most likely location for the ship they are seeking. Andrew Harris noticed the connection with verticality: how Andy was always looking at the ground, even when performing, and how he took on jobs whose actions mirrored detecting. They noticed how it was Becky who made the decisions, with gender roles being explored, and how detecting is an act which connects you with the quotidian of yesterday.

Later, Jo and Innes developed their ideas and thinking into a session for the RGS-IBG's Summer conference in 2018. When they published an open call for papers I even started writing one. I visited the filming locations in Suffolk, including Framlingham and Aldham, but didn't get it finished, and it would have been rather less than academic if I had.
I had started to explore how programs like 'Detectorists' can lead to a growth in tourism, with people wanting to visit the filming locations. It also explored how the real place is subtly changed by the film makers, so that its geography is changed. Those living in the place can immediately see the lack of logic to particular scenes when they watch them, those unfamiliar remain blissfully ignorant.

Here's an extract from the RGS session abstract which led to the book:

The BAFTA-winning situation comedy-drama “Detectorists” has, across three series and a Christmas special (2014–17), garnered critical praise for its affectionate portrayal of metal detecting and amateur archaeology in rural England. In its attention to the embodied practice of detecting and to the social worlds of detectorists, the programme has been described by critics variously as “about hardly anything and almost everything” (Lloyd 2015) and “the most accurate portrait of men being men that you’ll find in current popular culture” (Fewery 2015). For one Twitter user (Sumsion 2014), the show is simply “a warm, beguiling, slow-burn meditation on male friendship and prosaic details of Englishness, plus some metal”. Explaining his motivation for creating “Detectorists”, Mackenzie Crook, writer and director of the programme, has said “I wanted to do an exploration of men and their obsessions, and I wanted to do a celebration of people and their hobbies, and a celebration of the English countryside” (Crook 2015).

Jo describes the lead up to the session when they wondered whether they were going to make fools of themselves, but it turned out to be very successful and well received, and the programme's producer, Adam Tandy came along too. Isla Forsyth and Andrew Harris added their own pieces as well.

Following the session, Jo and Innes were approached by Colin Sackett of Uniformbooks and asked if they would like to turn the session papers into a book. 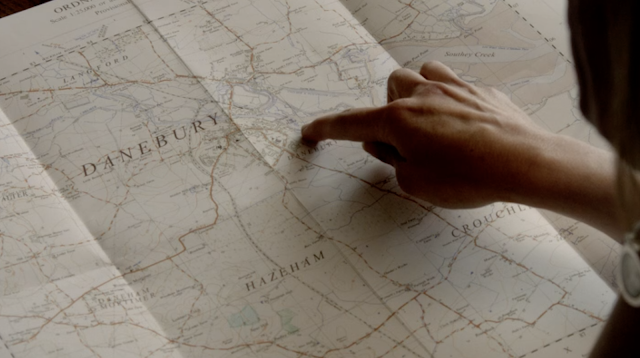 The book is beautifully presented and has the added value of a foreword written by Mackenzie Crook who professes himself surprised at how the 'readings' of the authors of each essay have revealed to him some things he never noticed himself - reminding us how geographers see the world with 'a different view', to add to the views of archaeologists and detectorists to interpret the landscapes of anywhere, not just the Landscapes of Detectorists.
Crook has since turned his talents to a resurrection and new interpretation of ‘Worzel Gummidge’, drawn from similar themes of folk tales blended with warnings of climate change and the seasons being out of balance - other geographical themes. A series is apparently forthcoming.
I appreciated the references to some relevant geographical scholarship and others such as Joe Moran, who has written on the quotidian (a personal interest of mine as well), and Tim Edensor, both of whom also consider the creation of the landscape and the role of artefacts to connect us with the lives of those who have occupied the landscape before. The third series introduced more images of the previous occupants, alongside the family of magpies that have been collecting gold in their nest in the tree beneath which Andy and Lance sit to eat their lunch and reflect on their hobby.

The text is accompanied by plentiful black and white stills from the series.

Reading the book gave me a desire to rewatch key scenes from the series to spot things I hadn't noticed. I'd forgotten one scene at the start of the third series, for example, where the solar farm developers Photon Harvest are talking about a new development and unroll a large aerial photograph on the desk in a London highrise. It shows Church Farm outside Danebury.
The camera zooms down into the landscape, 'Powers of Ten' style, to reveal a yellow TR7 and Lance and Andy walking out to start the day detecting... 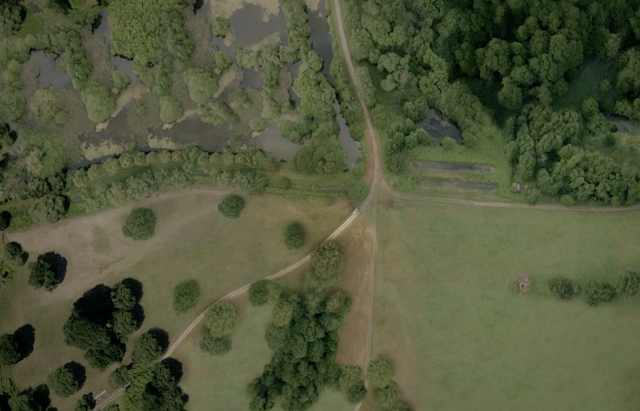 Reading this wonderful book has given me a desire to visit the church at Aldhouse again.
Now that the pubs are open I'll also head for Great Glemham and raise a glass to Innes and Jo in 'The Two Brewers'.
I'm also going to finish off my 'paper' on the landscapes explored in the series. This book is very much a book by and for geographers, for those interested in place-making and cultural geography, such as the sub-culture of detectorists and their practice. It's also about the construction of a narrative which has hidden depths, just as any ploughed field has. One particular field on the edge of the village in Snettisham in Norfolk where I lived for 12 years yielded up a golden treasure which, like Lance's brooch is now on display in the British Museum.
https://www.britishmuseum.org/collection/object/H_1951-0402-2

Some details on how the book came about, and the development of the essays can be seen in this interview here.

Full disclosure: I was sent a review copy of the book by Colin Sackett of Uniformbooks, but would have purchased a copy of my own.
Purchase link is here.

Uniformbooks have always been supportive of, and receptive to, geographical thinking, having previously published books featuring the work of former GA President Geoffrey Hutchings and also David Matless.

P.S: Jo, I'm still hoping to get my pin badge from the finds table :)

Thanks to Duncan Willis for the expert car knowledge and subequent correction to an earlier draft :)
I referred to Lance's car originally as a TVR, which is also a mistake made by Maggie in the series, as Duncan reminded me.
http://downloads.bbc.co.uk/writersroom/scripts/Detectorists-S3-Ep4-Shooting-Script.pdf
Detectorists Innes Keighren Joanne Norcup Landscapes of Detectorists Sense of Place TV Uniformbooks