on May 15, 2021
I'm more than half the way through my year as the Vice President of the Geographical Association.

In late September 2019 I had the first of many meetings with GA colleagues over the next 4 years. This was to start to get me up to speed with what the role involves. I've since had many phone calls, and been invited to a great many meetings with specific roles and aims. I've had Presidents Group Meetings, Governing Body meetings, and also got an invite to a rather special 75th Anniversary event at the Field Studies Council. We worked on some policy changes and funding for projects. I continued the annual moderation of the GA's Quality Marks and helped with Conference Planning Board. There have been e-mails supporting various other activism and to be honest my work has only just started. I've learned a great deal about the role of the Trustees and the arrival of Covid-19 added another layer of nuance and challenge to the role. The staff at Solly Street have been superb throughout, and we have been supported by members who continue to appreciate the value of GA membership. We launched the new Strategy for the next five years.

I've also been working on some GA publications, wrote up a big chunk of ideas for the new Geography at Home section of the website, filed Webwatch columns for GA Magazine and numerous other bits of writing and responding to requests, including a book called 'Why Study Geography'. I'm also involved in several GA projects, one of which will be revealed in the Summer 2021 issue of 'GA Magazine'.

I've got lots of plans for my Presidential Year itself. I hope that we have the opportunity to complete these given the circumstances.

I'm compiling and researching and writing my GA Presidents blog of course, which is taking shape, and helping me uncover a whole range of stories of how the Association has developed, along with the subject over the last 126 years. I'm currently up to 2010, so am getting close to bringing it up to the present day.

One of the other more extended plans I have is to develop a series of resources,  including a book which is already underway and built around an idea I started a few years ago, and share this around the GA branches as well and with others during 2021-2. It's called Quotidian Geographies.... I even made a logo for it and some special badges, which I will explain more about later in the year...

Another way to put it would be to call it Everyday Geographies: every day we live Geography, and geography can be found in actions and events and objects we experience everyday. These can be as powerful as other natural phenomenon we may study but never experience... 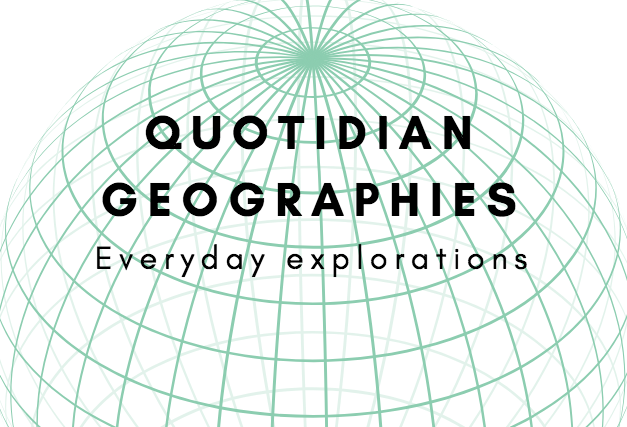 This is what I wrote when I put forward my original statement for possible election as President.

My Presidential ams would be to revisit the powerful work we carried out as part of the Action Plan for Geography, refresh connections with RGS-IBG, and promote geographical exploration in various guises.

My current interests reflect my work on Mission:Explore, and the power of geographical stories to shape curriculum making. I aim to leverage my networks and connections to attract a diverse audience and some wonderful speakers to conference, and support teachers throughout the year, visiting GA branches and other relevant events.


One of the great aspects of geography is that it takes place every day. We are all, to paraphrase my blog title, "living geography" every day, and geography is very much a living and breathing subject.

About ten years ago, I read an excellent book by the philosopher Julian Baggini. It is called 'Welcome to Everytown'. In the book, he lives in what, according to a polling organisation at the
time, was the most average / representative postcode in the UK, which turned out to be S66. Baggini decides to spend six months living in the most ‘typical’ English place he can find. He asks a demographic profiling organisation to find him the postcode area with the closest match of household types to the country as a whole. They come up with S66, on the outskirts of Rotherham, South Yorkshire This, then, is ‘Everytown.’
The location for the book is interesting as this is the postcode where I was born, and lived in the village of Wickersley until I went to complete my degree and later my PGCE, after which I moved away and lived in Norfolk for the last 30 plus years.

The book starts with a quote from Elbert Hubbard, an American writer (1856-1915)

"Little minds are interested in the extraordinary; great minds in the commonplace.."

Keep en eye out for the announcement coming soon that we will be accepting submissions to speak at the 2022 GA Conference. I shall add it to this blog several times during that period so that we can get as many people involved as possible and begin to put together a timetable which will attract and draw in as diverse a group of geographers as possible to inspire, inform and entertain.