OCR Pilot GCSE Geography - did you teach it?

Last week, I spoke to Di Swift, who was employed by the Geographical Association in 2001 to develop their CPD offering. One early project which grew from Di's involvement was the GeoVisions project which I blogged about over on my GA Presidents blog, and seems to have led onto other projects. These included the Young People's Geographies project, but also the development of a new qualification, which I had the great pleasure of being involved in teaching for three years as I moved towards the end of my first period in the classroom.

This was the OCR Pilot GCSE Geography.

It was the best specification I had the privilege of teaching, and ran it for the last few years of my teaching before I left to join the GA in 2008 as Secondary Curriculum Development Leader. A lot of the curriculum making was done in association with students who were keen to explore the new opportunities that the specification provided. 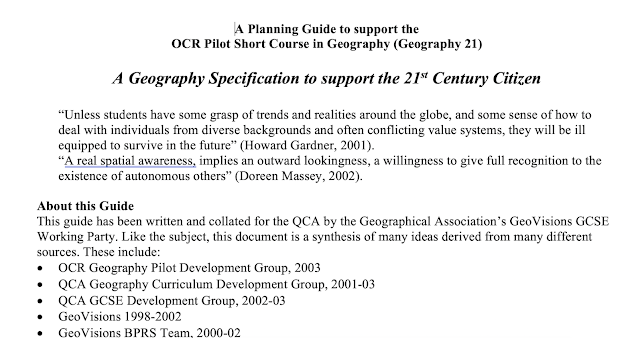 The specification emerged from the work of a sub-group of GeoVisions, which included:

Eleanor Rawling was also involved in the development of the materials, as was Phil Wood from the University of Leicester and Justin Woolliscroft. Other teachers contributed ideas for particular units. The first and second tranches of the Pilot schools were added in 2003 and 2005, and the 3rd tranche was added for teaching in September 2006 - this included my own school.

In total, around 70 schools were involved in the Pilot for this GCSE Specification, with over 40 in the original tranche.
One particularly important element was the innovative and flexible assessment: the exam was worth just 33% of total grade: with 67% coursework. In addition, there was great flexibility over the form of that assessment in individual centres.
The course was based around 5 key themes: called FUGIS.
Fugis from GeoBlogs

Here is the Specification, which allows you to see the Core and optional units.

I created a blog while I was teaching the Specification and shared ideas and resources with other schools that were also teaching the course, as there was no textbook, although the GA and RGS offered support. This was a time when the Discovering Antarctica website was launched, and the GA published the Cape Farewell resource created by Fred Martin. 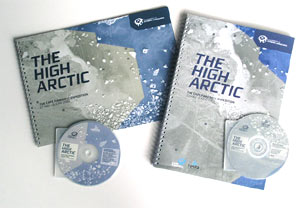 Page on my Geography Pages website from 2008 - via Web Archive

GA Support for the Pilot GCSE - via Web Archive 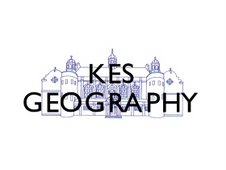 Tony Cassidy also had a blog and we worked to support each other.

Get in touch if you were one of the teachers who taught this spec, I would love to get some memories of those times collated....