The eruption is continuing and according to some reports it is of a kind which may carry on for years to come and create a whole new area of peninsula, with new peaks. Reports also say that the eruption may be slowing from its early phase. Let's hope it carries on for a while longer until we are able to visit again. By then infrastructure is likely to have appeared - at the moment traffic is affecting the resident of Grindavik and traffic is back to the Blue Lagoon turn off, which I know quite well.

Val Vannet has led me to two new options for viewing the eruption.

There is a new 'zoomable' webcam pointing at the volcano. This has improved internet connectivity. 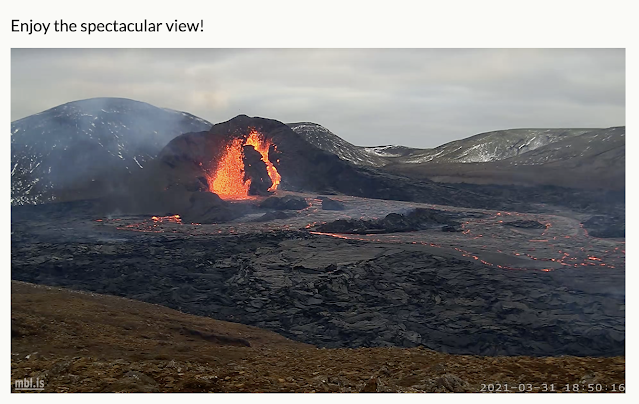 The company Sýndarferð has also photographed the hiking path to the eruption site in Geldingadalur valley, Fagradalsfjall mountain, Southwest Iceland, and posted it on Google Maps.
You can view the hiking path here, change the viewpoint and ‘travel’ in either direction.

“This is our contribution toward increasing the safety of those who want to visit the eruption site,” an announcement from the company states.