The latest GeogPod podcast, and the last for a few weeks, is an interview with Alan Kinder who talks about his journey to becoming the GA's Chief Executive, and the work of the Geographical Association. He says lots which are of relevance to the contents of the GA Presidents blog. 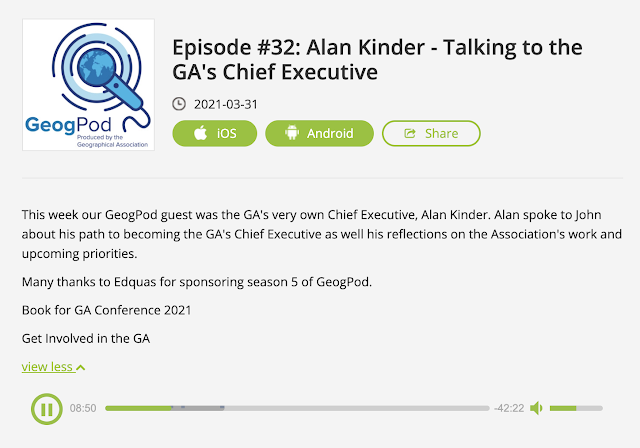 John talks about his own experiences with the Geographical Association, going back to 1976 and visiting the library at Fulwood Road. He and Alan also say something which I've heard quite a few times before - that visitors to Solly Street can't believe how much is done by such a small number of staff.

Alan talks about the purpose of the GA and its link with the subject discipline and the notion of community and lays out with his usual clarity the key purposes of the GA, and how those are communicated and sometimes contested.

The GA is an association of geography educators, and developed to enable discussions of shared values and the exchange of ideas.

John discusses Douglas Freshfield's introduction to the first journal 'The Geographical Teacher', something I've also covered over on the blog, and the impact of the internet on teacher development and communicating.

Alan reminds us of the importance of the GA, and how it has got to where it is now... influenced by the 100+ GA Presidents who have held the role over the decades, and those who have got involved in whatever way they have with the GA - and there are several options for that.

He also talks about the value of being a GA member, and why some people may not become members.

Alan talks about the future of the GA, and the challenges ahead as well as the powerful work that continues to be done, and discusses the GA's new Strategy as well as trailing the GA Conference ahead - conference began in 1921, so this is the centenary year for that. 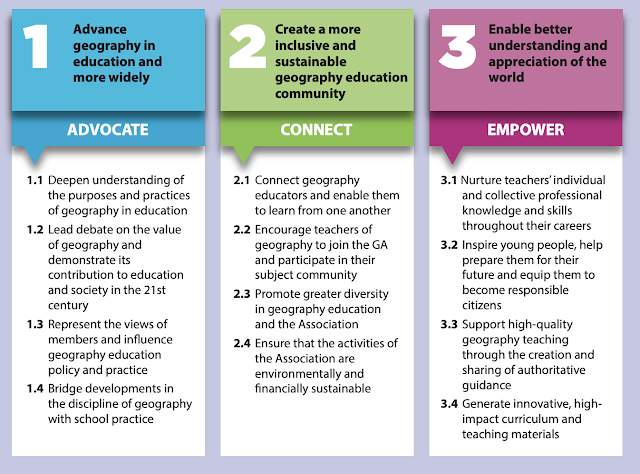