International Baccalaureate: So many possibilities

Earlier today, I presented at the 2021 Swiss IB Geography meeting which had been organised by Richard Allaway and Matt Podbury. This attracted people from a number of countries in addition to Switzerland, including places as far as China.

The event including a talk from Des McDougall on his VR Glaciers project, and some discussions around Virtual Fieldwork. 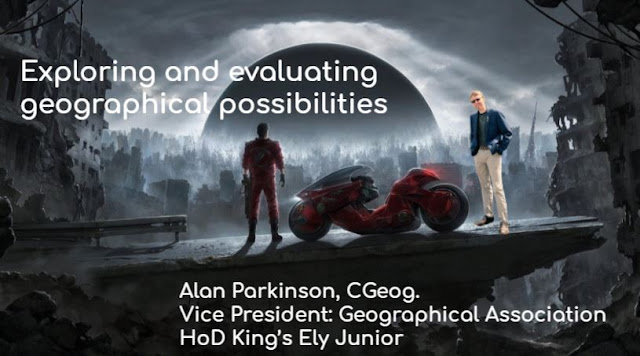 It concluded with a teachmeet and sharing of ideas from the delegates.

Here is my slide deck.

So many possibilities from GeoBlogs
A few points to make.
I have drawn on a number of key sources here:
- David Alcock's work - check out his blog here. I referred to work presented at the Geography Teacher Educators' conference in January 2021, and the most recent blog on this website is also key for considering planetary futures.
- 'A Good Ancestor' by Roman Krzanic. His website, and also TED talk are key here for exploring short term and long term thinking. Check out the book itself, which introduced me to some very interesting ideas worth pursuing and also shared all the graphics from the book (as does Danny Dorling, which is particularly helpful). They are shared under CC license.
Our descendants own the future, but the decisions and actions we make now will tremendously impact generations to come, says philosopher Roman Krznaric. From a global campaign to grant legal personhood to nature to a groundbreaking lawsuit by a coalition of young activists, Krznaric shares examples of ways we can become good ancestors -- or, as he calls them, "Time Rebels" -- and join a movement redefining lifespans, pursuing intergenerational justice and practicing deep love for the planet.
- The RECK test designed by Caiti Walter and Steve Puttick.
- The 8 volumes of Weapons of Reason.
I also referenced Kate Raworth, Johan Rockstrom, the Dasgupta Review and others.
Thanks to Richard and Matt for the invite and also to Kelvin Williams for the discussions around IB.
David Alcock Futures IB IB Geography International Baccalaureate Possibilities Roman Krzanic Weapons of Reason