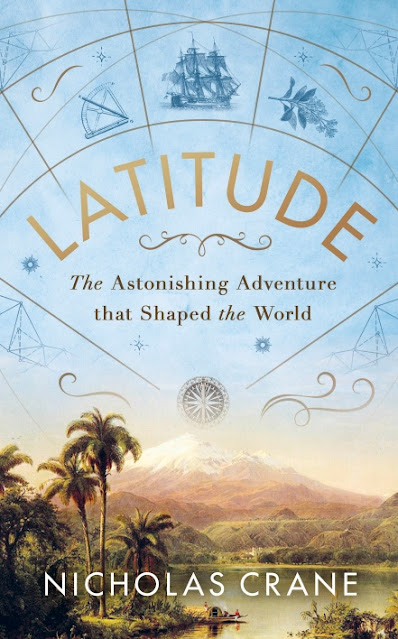 'Latitude' is the new book by Nick Crane, former President of the Royal Geographical Society.

I listened to Nick talk today at the Hay Festival which is online and digital and free of charge. There is a wide range of talks of geographical interest.

The year is 1735.
Twelve unruly men board ships bound for South America.
Their mission? To discover the true shape of the earth.
They will be exposed to a wilderness of dangers none can imagine.
The survivors won't return for ten years.
Nick talked about the need for an expedition to measure one degree of latitude and prove whether the earth was flattened at the poles, or pointed at the poles. A team of scientists was assembled in Paris. They headed for Quito, which took a year to get there, and had to make their own maps ironically, although their journey had the aim of making future maps more accurate.
There were some journals that are referred to by Nick that he used to piece together the journey. He wrote the book during lockdown and talks about using online archives, Google Earth Pro etc.
The triangulation required them to climb volcanoes and cross raging rivers, and wait for the weather to clear to get a sighting on a pyramid they had previously erected, but which perhaps had been dismantled by local people, or damaged by the wind. They were affected by altitude sickness and other problems because they slept for days at high altitude not realising how it would affect them.
The book can be purchased from here.
It's a story well told, and I enjoyed Nick's description of the expedition and the fates of the men that were on it. There were some questions that were answered at the end of the talk as well. The book sounds intriguing and unpicks the fascinating stories of how the members of the expedition spent some of the ten years they were away from France. Worth seeking out the book. Signed copies can be purchased from the Hay Festival website.
Books Exploration Hay Festival Latitude Nicholas Crane Nick Crane RGS-IBG Travel Writing