2021 would have been the 100th birthday of the Orcadian poet and author George Mackay Brown.

I have all of his books. Here are some of them on my shelves: 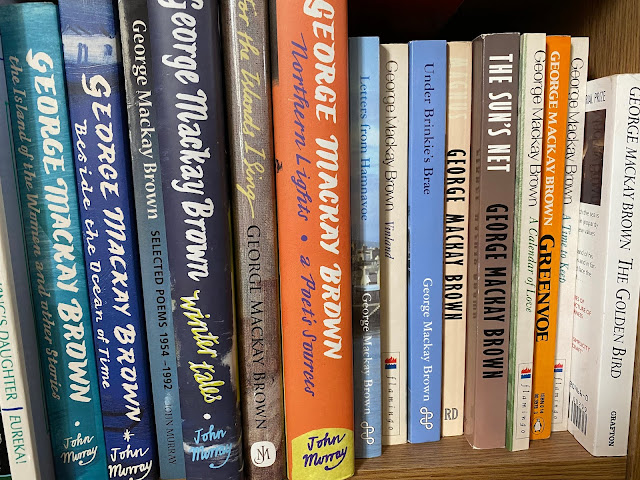 My former and much missed colleague Tim Steer had a connection with Stromness, and used to hunt out books for me while in the Orkneys and I remember him ringing me one evening over 20 years ago having just returned from a trip out with a local man to haul up fishing creels to say that he had got me some of the books on my list. 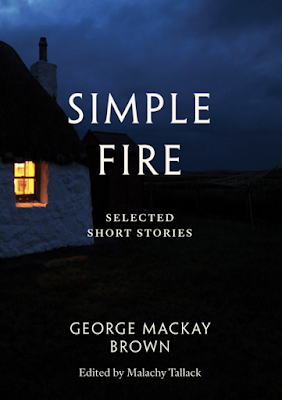 A new collection to commemorate this 'centenary' is now out, and is edited by the author Malachy Tallach, and is called 'Simple Fire'.

In his foreword, Malachy describes George as:

"an embedded observer, alert always to the tensions between community and individual."

Of his influences, he mentions:

"it was the language of the pub and the street corner that Brown most cherished. It was the storytelling of gossips and drunks, of sailors on leave and of friends gathered around a hearth. He knew how significant such exchanges could be, how the stories people shared were part of what held a community together, both in the present and over time."

And on his connection with place:

"Reaching back as he did he found “rhythms of land and sea” that brought “a pattern and a harmony” to all of his work. He identified threads of continuity that held the islands together through the ages, and he wove them into his words. It was an unending attunement and fidelity to place. For Brown, I think, that fidelity was hardly a choice at all. He felt no particular urge to travel, and indeed for much of his life seems to have been positively repelled by the idea of leaving home."

Find out more about him here.

ABOUT GEORGE from ST MAGNUS INTERNATIONAL FESTIVAL on Vimeo.