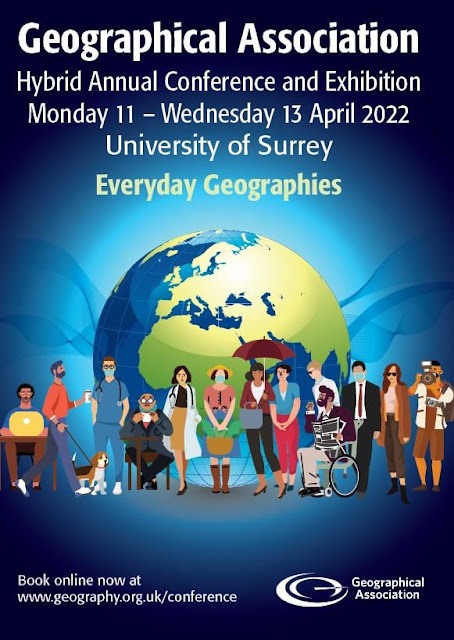 I've now completed the first month of my year as President of the GA, and it's been an interesting and very busy one, along with the return to school for another academic year with new groups and a new timetable to get used to along the way. I can see why it's been a while since we had a teacher as GA President, but that's not to say we shouldn't have another one asap, following on from the tenure of Alastair Owens for 2022-23.

I plan to post an update here at the end of each of the 12 months so you can see what I get up to, and the range of activity that a President is involved in.

I received an article that I had written for Routes Journal back from the peer reviewers with some comments on changes to make ahead of publication in early 2022. This is one job I've been looking at. The article explores the research that I did for the GA Presidents blog over the last two and a half years.

Thanks also to Matt, Richard, Ellena and David for the various gifts that I received in the first week. My mugs are in regular use at school. Thanks to TMJ for the illustrations. 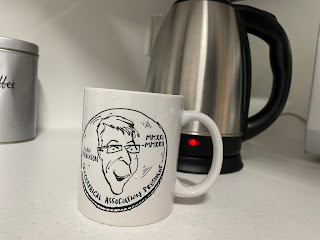 Given my theme of everyday geographies there's certainly been something to do everyday: emails to answer, queries to answer and conversations with many of the GA's staff at Solly Street - the HQ in Sheffield. I've had messages and some lovely messages via Twitter DMs, email, Facebook, WhatsApp and various other means.

The first week involved a field trip with Year 4 students to the Norfolk coast - a great day and a reminder of the value of fieldwork. 2022 will see our planned National Fieldwork Week which I am involved in. Look out for more on this in the GA News for Autumn 2021.

There was also the hosting of a one hour session on COP26 with a range of guest speakers - see earlier on LivingGeography for all the links to the presentations. Thanks to all those who presented, including former GA colleague Paula Owens who closed the event.

The second week started with the release of the results of the moderation of applications for a number of funding opportunities that the GA offers. Some of these are for members of our volunteer groups, others are for everyone.

There have been discussions and emails and Zooms around a number of projects and areas:

- the Geographers' Gaze project to open up the archives a little, with former President Peter Fox involved

- items for GA journals now and in future issues - my Webwatch column for January 2022 is already underway, for example along with a piece for Primary Geography

In the third week, focus moved to Conference Planning, and Conference 2022. This is a huge undertaking and there were lengthy meetings with the whole Planning Board to look at the sessions which had been submitted - well over 100 - along with those who I had personally invited. It was the first look at the overall possible format, and some planning ahead for the hybrid conference. Isabel and Becky are pulling things together for another chat in a week's time.

I'm really looking forward to letting people know some of the exciting people we have presenting at the event.

I also completed a presentation slide deck for an education conference in Turkey at which I am an invited speaker, so that it could be sent for translating ahead of the event - the theme is 'Everyday Geographies' and I'm also mentioning my book 'Why Study Geography?' which has been reviewed in RIGEO recently and also elsewhere. I also continued to work on my slide deck for the Scottish Association of Geography Teachers' Conference next month on the theme of 'rewilding'.

We traditionally exchange fraternal greetings at our respective conferences and I've been attending regularly since 2004.

Alongside that I also planned a 3 days ERASMUS+ meeting to take place at my school and worked on some of the resources that are required for it. This will be a chance to welcome international colleagues for the first time in over two years. We had Zoom meetings for the 2 projects. Plenty about those on LivingGeography.

There was also a meeting of the GA's Education Group. This is the main group that supports the Governing Body and staff at HQ with key thinking. It is chaired by the President and this involved rather a lot of preparation and reading and knowledge of the ByLaws and other aspects of the GA's operation. I know almost every member having visited their groups or worked with them in some way.

The final week included further discussions over conference and funding, and follow ups from the EG meeting. There was also a chat with Olwen Lintern-Smyth: Chair of the GA's Trustees.

I ended today by submitting an exciting proposal form for an international conference in 2022, connected with an important GA initiative that is currently underway.

Preparations are also being made for our next meeting of the GA's Governing Body. This will occupy some time in tomorrow's meeting, which I shall tell you all about at the end of October when I share my month 2 update. The full list of the Governing Body is in GA Magazine.

I'll also start the 2nd month by hosting and presenting at an eConference for Early Career Teachers all day on Saturday, and re-recording a bit of audio for my involvement in a well known Geography podcast to be released next month.

If you think that the Presidential role for 2023-4 might be you, check out the opportunity here and in the latest GA News. Also feel free to get in touch - I've had a few conversations in that area too. 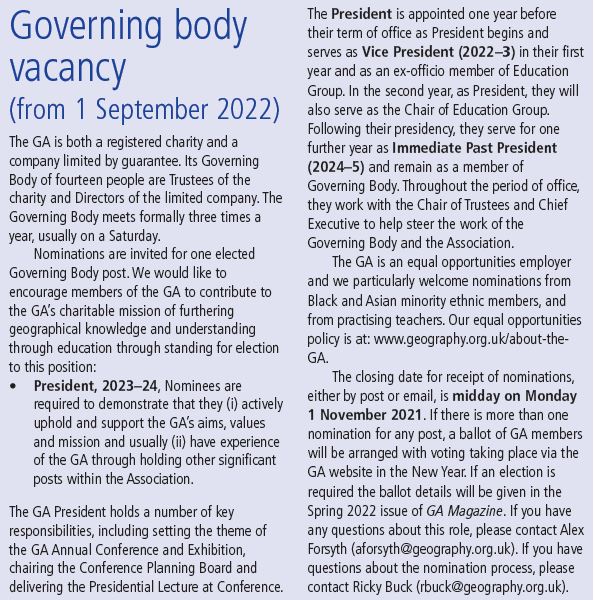 You have one month to apply for this role. I shall remind you during October :)
#potga EG Everyday Geographies GA GA President Geographical Association President Routes Journal SIGs