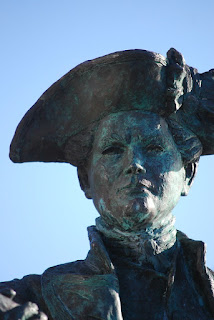 Some towns are in need of a bit of a lift, and need some funding or project to kick start a change in their fortunes.
Some have put their hat in the ring to be designated as a city in the Queen's Jubilee year.

Vision King's Lynn is a project which was announced last year as receiving funding. It's a good idea to explore local issues and plans such as this as they can offer a long-term project to observe. I did this in a previous school with plans to regenerate the South Lynn area with new sustainable communities. I lived in the town for about 10 years, and taught in a school there for 20 years, so know it very well.

Check out the MyTown campaign - link to Government page to find out more about the funding being offered.

Banksy visited King's Lynn as part of his Spraycation to the East during Summer 2021, although ironically people wanted the artwork he added to a statue of local fairground equipment manufacturer to be removed.

Another visitor was Mark Steel as part of his comedy series where he visits towns for a comedy routine based on the local geography and history.

Over the New Year, I spent a week in Whitby and Mark Steel's episode on that town is well worth listening to as well.

Check out the archive of shows here - perhaps he's been to your town...