A few days ago, I read this piece in the Wall Street Journal. Now there is more detail emerging of this  urban scheme, which is very unlikely to appear but if so it would be a remarkable feat of engineering, and unlike anything built before... and I'll leave it at that for the time being.

It's called the Mirror Line apparently and is planned for Saudi Arabia at a cost of over a trillion dollars as part of the 'post-oil' thinking. 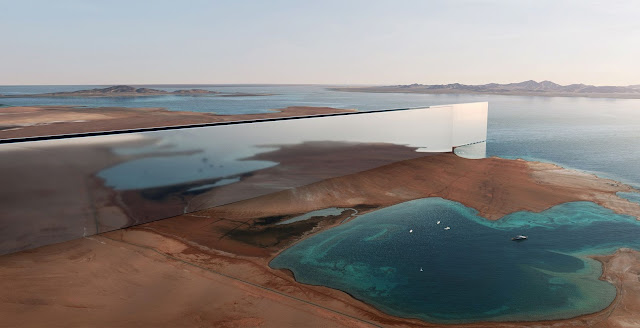 BREAKING: This is currently being blasted out there by the Saudi news agency on behalf of the Saudi Crown Prince MBS. “The LINE,” a proposed vertical & radically linear “ideal city of the future” proposing “Zero Gravity Urbanism…”

In general, it’s similar to vertical mixed architectural concepts I’ve seen in architectural competitions I’ve judged. I appreciate the clear focus on transit (linear & vertical) but it’s still a massive object in the desert, and feels designed for attention rather than building. pic.twitter.com/FX6fHjASE7

The comments on these tweets are excellent. I think the jury is out...

I have started to collect articles and images anyway, as I think this would be excellent to present to students and see what they make of it.

This piece from Interesting Engineering suggests some of the challenges ahead for the project.

Employees at Neom are concerned that after the coronavirus pandemic, people are not very keen on staying in high-rises, while the sheer scale of the project will alter the groundwater flow in the area.

The high-rise buildings also pose a hurdle in the path of millions of migratory birds that use the corridors every year, while the project will also displace tribal people living in the area, which are being forcibly removed to make way for the project, WSJ reported previously.

The scale of the project will also require the use of autonomous systems to harvest and bundle vegetables, while shared kitchens and canteens will also be needed to feed the workforce.

The curvature of the Earth presents problems in the construction of the city, which is planned with 2,600-foot (762 m) modules. However, the biggest challenge would be how rapidly this can be done.

Last year, an impact assessment report stated that the project could be completed in five decades.
However, the visionary of the plan, the Crown Prince, wants it to be completed by 2030.
Cities Development Futures Mirror Line Neom Saudi Arabia Sustainability Urban