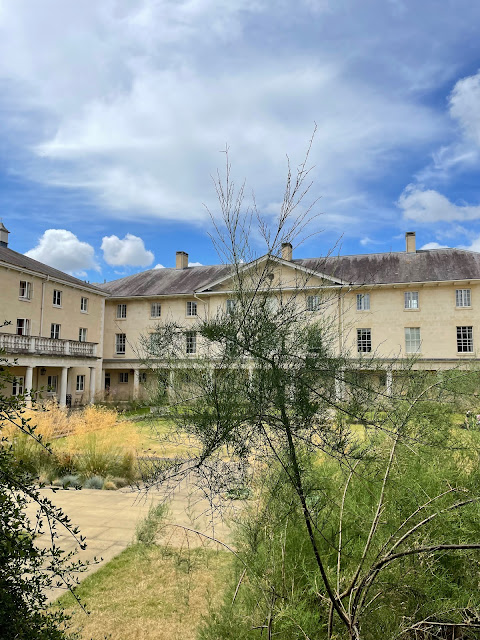 July sees the end of the school term and the start of the summer holidays which are a particular focus for teachers.

For me, the month started with a flurry of activity and continued to be busy for most of it.

The first main event was the PTI Subject Enrichment Residential.

This is an annual event (now back after several years when it could not take place).

It is hosted by Cambridge University, and takes place at Downing College, which is close to the city centre, and runs across three days.

Claire Kyndt, my colleague also presented her ideas which were based on the Dear Data project: data visualisation.

This was followed by a trip to Parker's Piece to carry out some fieldwork. This included a range of options for collecting data or interacting with the place.

Interestingly, the area was occupied by the stalls, stage and other elements of a free weekend Mela event. This included an observation wheel which Claire and I went on for a good view of the area, across the city, and with a distant view of Ely Cathedral on the horizon. There was some good feedback from the delegates.

It was then down to Stansted to catch a flight to Madrid. Thanks to Claire for giving me a lift to the airport. Thanks also to Miguel-Angel for picking me up.

I was there for 4 days to lead a course for the GI Pedagogy project. We were hosted by UNED. 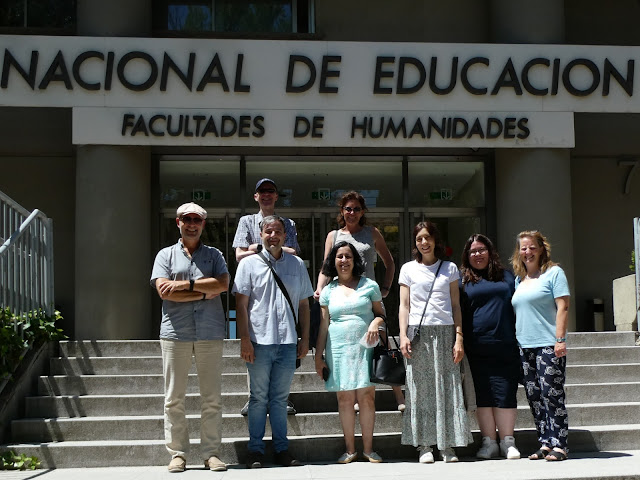 The GI Pedagogy project had received an extension of four months from the British Council.

I've previously blogged about the nature of this project, and the one that predated it. I co-presented the introduction to the 3 day course, and multiplier event with my colleague Michaela Lindner Fally from Borg Obendorf school in Austria. 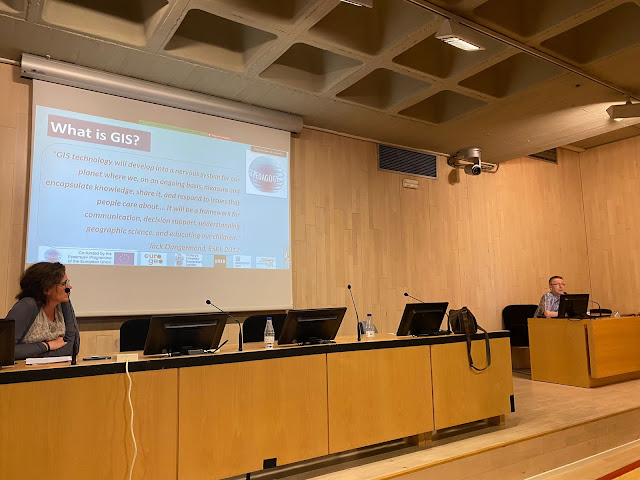 The training course at UNED took place on Monday to Wednesday.

We are grateful to the delegates who joined us from a number of countries. There were also quite a few online delegates.

Luc Zwartjes, one of my colleagues was leading quite a few of the sessions, and was then heading off to the ESRI User Conference in San Diego where he also presented our project to a good audience.

Final days of term then followed, which were also hot, and included the Powerhouse Games with John Willis and the team.

A Governance Working Group meeting also took place, where there were several important items to consider for next year. This is part of the strategy work which the President is involved in. It took place in London as a 'central' location for most of us.

There were also plenty of submissions to look at from the GA's two Quality Marks: Primary and Secondary. This has been part of my summer routine for over ten years now. There were plenty of entries, which is great to see.

The PGQM is the Primary Geography Quality Mark which schools can apply for. I have been moderating applications for some years now, and this year there were a growing number of schools as some had deferred

I was involved in a Zoom meeting with a school which had opted to go straight to an application for Gold. This was a lovely chance to find out more about the way that a few individuals can make such an impact within a school.

The IGU Centenary Congress took place in Paris, following another related event in Rennes the week before.

The GA has been connected with the IGU for some time now, with the work of former GA Presidents such as L Dudley Stamp and Norman Graves.

Sadly, this coincided with a heatwave and unprecedented heat and my travel plans were thwarted at the last minute as trains were delayed and I missed the Eurostar, which it then turns out was delayed by over three hours and took about six hours to make the journey. The heat in Paris was a factor, along with vandalism of the power lines.

This was a bit of a disaster as I'd spent weeks working out my itinerary of various adventures around the IGU sessions that I was involved in, with some Georges Perec fieldwork to carry out.

The paper I'd worked on can be viewed and downloaded from ResearchGate.

It was great to see that our GI Pedagogy project was presented at the IGU however, and with a great turn out for the session. 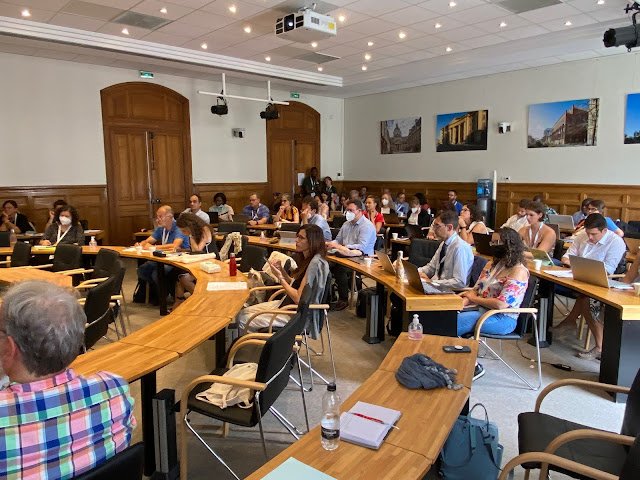 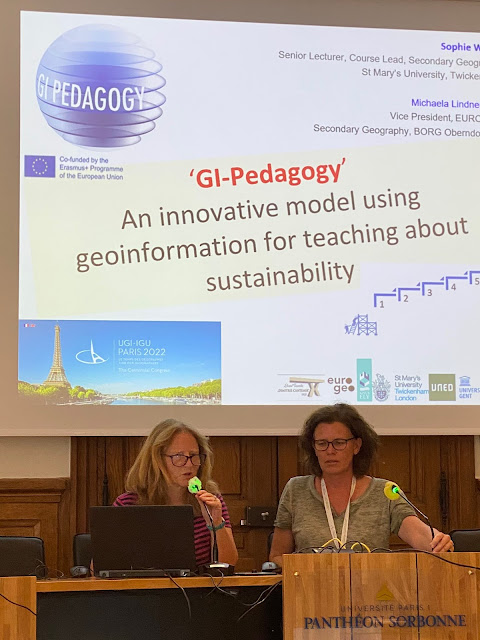 We also had some unprecedented heat, so instead of suffering 40 degrees in Paris I was present to experience 40 degree heat in the UK instead, which led to fires destroying houses just 20 miles from where I live.

This map highlights the places that are forecast to be hotter than the UK on Tuesday.

It's about 1.2% of the planet's surface. pic.twitter.com/1CW6krIOtb

There were other jobs to do this month:

I also had some good news towards the end of the month.
I have been successful in my application to receive a Fawcett Fellowship for 2022-23 from the UCL Department of Geography/Institute of Education.
This will involve me in some research and writing and offers a fund to pay for related expenses. My focus will be on the everyday and how it forms part of curriculum making.
I also met up with Denise Freeman, who will be GA President in 2023-24 to talk through some of the work that Presidents have to do.
The month ended with a long awaited holiday.

Topsham in Devon is a place which we have been visiting as a family for many years and we generally stay in the same place, which sits right on the River Exe. It was great to be back again.

Here's the Cobb at Lyme Regis: 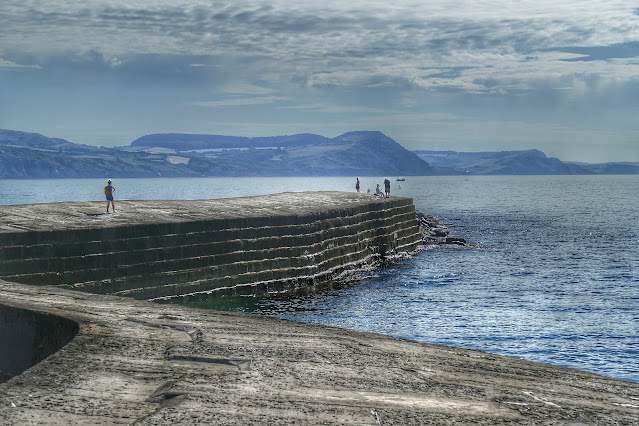 The month ends with the usual Twitter stats, which show a busy month but one which had fewer tweets than usual - a pattern likely to be continued next week.

This leaves just one month to go and then my year as President will be over all too quickly. 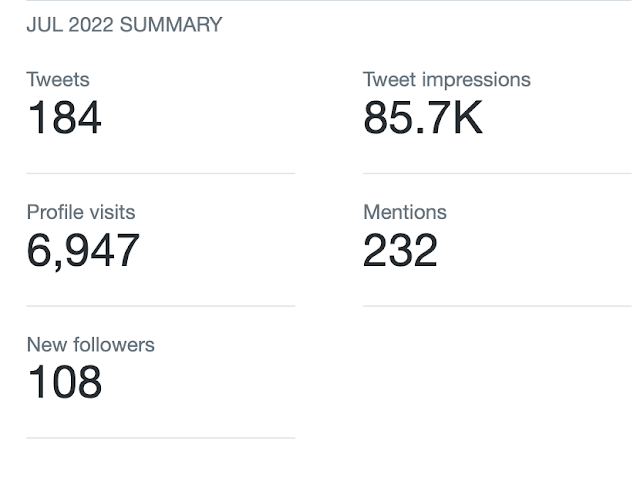 I hope to pass on my experiences to future Presidents and I hope my Presidents blog project will be a legacy that I will add to when I get the chance to visit the GA Archives.